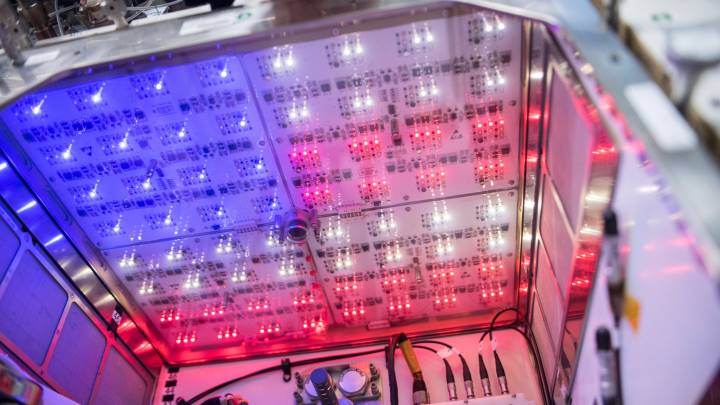 The International Space Station is, as its name implies, a common ground for astronauts from many different countries, but that doesn’t stop them from having a little bit of festive fun on the Fourth of July. There is currently a trio of American astronauts aboard the space station, and they’ve taken it upon themselves to do a little bit of red, white, and blue redecorating.

In honor of Independence Day, the Advanced Plant Habitat on the space station has been given a bit of a makeover, with an LED lighting array switched over from its usual hues to an American flag pattern. It looks pretty darn cool.

The Advanced Plant Habitat is designed to help astronauts monitor and observe the growth of plants in space. NASA describes the module thusly:

The habitat is equipped with a monitoring system, the Plant Habitat Avionics Real-Time Manager, or PHARMER, that provides real-time telemetry, remote commanding and photo downlink to the team at NASA’s Kennedy Space Center. The system records data from its 180 sensors, including water usage, carbon dioxide levels, light levels, temperature, humidity and oxygen in the growth chamber, and temperature, humidity and oxygen levels in the plant root systems, and sends it back to Kennedy for analysis.

It’s all pretty complex, but a bright LED array on the top of the habitat can be tweaked however the scientists need, and for the Fourth of July it’s received the old stars-and-stripes treatment. Obviously it’s just a temporary change, as the bright red and blue lights probably aren’t a favorite of the plants being grown inside, but it’s a neat little tribute nonetheless.

The current ISS expedition, which is number 56, will last until October, when astronauts who arrived at the space station in March will travel back to solid ground. The others will remain onboard until December, and will await the next round of astronauts who will fill in for those that departed.