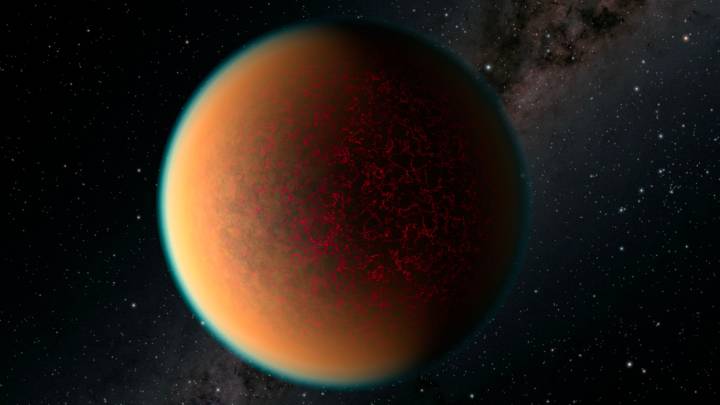 One of the only reasons we’re all able to live our lives on this planet is that Earth was blessed with a robust atmosphere. That’s something that not all planets have, and scientists are still a little hazy on exactly what conditions during a planet’s formation and the following billions of years result in an atmosphere like ours. Now, a new discovery made by the Hubble Space Telescope suggests that planets that lose their atmosphere may not be doomed and that it may be possible to actually regrow an atmosphere if conditions are just right.

In a new blog post on NASA’s website, the space agency explains that images captured by Hubble of the planet GJ 1132 b hint at a very complicated history. The planet, which is a mere 41 light-years from Earth, orbits a red dwarf star and is believed to have begun its life as a “sub-Neptune” gassy world. The radiation from its star stripped it bare, leaving behind a rocky core not much different from a primordial Earth.

Current observations of the planet reveal that it has an atmosphere, but how could that be? Well, the researchers studying the planet believe that after its thick layer of gas was torn away by its star, volcanic activity on the surface began to ramp up in a big way. Using computer models to simulate this turn of events, the researchers say that it’s possible that the result was a secondary atmosphere of hydrogen cyanide, methane, and other hydrocarbons. It would be absolutely lethal to Earthly life — like sucking on a car exhaust pipe — but the fact that this new atmosphere even exists is pretty amazing.

“It’s super exciting because we believe the atmosphere that we see now was regenerated, so it could be a secondary atmosphere,” Raissa Estrela, co-author of a study on the planet that is set to be published in The Astronomical Journal, said in a statement. “We first thought that these highly irradiated planets could be pretty boring because we believed that they lost their atmospheres. But we looked at existing observations of this planet with Hubble and said, ‘Oh no, there is an atmosphere there.'”

Mars is a great example of a planet that lost its atmosphere and hasn’t gained it back. The planet’s present atmosphere is extremely thin compared to that of Earth, but it was likely much more robust in the distant past. The planet’s weak magnetic field failed to protect the atmosphere from the intense outflow of charged particles from the Sun. Those particles collided with atmospheric particles and gradually stripped them away, leaving behind what we see today. It’s been theorized that we may be able to rebuild the Martian atmosphere manually, though such plans remain in the realm of science fiction for now.