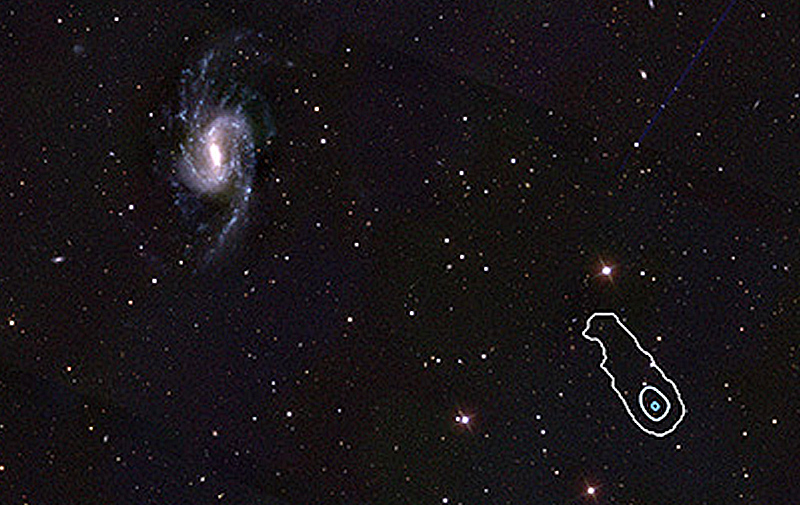 As NASA and other space agencies from around the world set their sights on exoplanets and destinations within our Solar System that could host life, some astronomers are enjoying a very different sight: a galaxy slowly being starved to death. The Little Cub galaxy is dying, and scientists are excited about the opportunity to watch the system gradually succumb to the ravages of its nearest neighbor as it is stripped of the resources needed to grow.

Little Cub is situated near Ursa Major — nicknamed the “Great Bear” constellation, which gives Little Cub its fitting moniker — and the dwarf galaxy is in the process of having its gas sucked dry by a massive nearby galaxy called NGC 3359. That gas is what a dwarf galaxy like Little Cub needs in order to grow larger and form more stars, but it appears it will never have that opportunity.

Scientists see Little Cub as a great example of how a primitive galaxy existed just moments after the Big Bang, and it is preserved in such a way that it could offer some groundbreaking insights into what the universe was like in its very earliest stages. A paper detailed the ongoing research was submitted to Astrophysical Journal Letters.

“We may be witnessing the quenching of a near-pristine galaxy as it makes its first passage about a Milky Way-like galaxy,” lead author Tiffany Hsyu, of UC Santa Cruz explains. “It is rare for such a tiny galaxy to still contain gas and be forming stars when it is in close proximity to a much larger galaxy so this is a great opportunity to see just how this process works. Essentially the larger galaxy is removing the fuel that the Little Cub needs to form stars, which will eventually shut down star formation and lead to the smaller galaxy’s demise.”