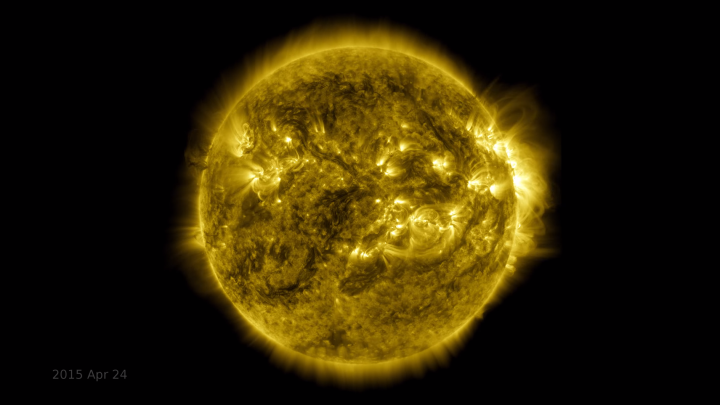 We like to think the world revolves around us but unfortunately, it revolves around the Sun. Our Sun is one of the reasons we’re all here, and without it we’d be gone in a hurry. So, it makes a lot of sense that scientists like those at NASA want to learn absolutely everything that they can about it. To that end, NASA has sent multiple missions to get as close to our star as possible without being utterly destroyed, and one of those missions is the Solar Orbiter. Now, despite not being in fully powered-up science mode, the orbiter already captured a gorgeous glimpse at a coronal mass ejection or CME.

A coronal mass ejection is a release of energy from the surface of the star. To us, it looks like a massive blast of plasma blowing off of the surface in a firestorm of unimaginable intensity. To NASA’s Solar Orbiter it looks like a huge shockwave sent roaring into space. If that sounds awesome it’s because, well, it totally is.

As NASA explains in a new blog post, the CME was captured by the Solar Orbiter on February 12th, 2021. That’s a hair past its launch date from Earth, and well before NASA was planning on firing up the majority of the spacecraft’s science instruments. But despite not being in full science mode, the spacecraft still had its Solar Orbiter Heliospheric Imager online, and that tool was able to capture the blast of charged particles flying away from the Sun.

The first coronal mass ejection, or CME, observed by the Solar Orbiter Heliospheric Imager (SoloHI) appears as a sudden gust of white (the dense front from the CME) that expands into the solar wind. This video uses difference images, created by subtracting the pixels of the previous image from the current image to highlight changes. The missing spot in the image on the far right is an overexposed area where light from the spacecraft solar array is reflected into SoloHI’s view. The little black and white boxes that blip into view are telemetry blocks – an artifact from compressing the image and sending it back down to Earth.

But the solar eruption wasn’t just captured by the Solar Orbiter. NASA’s Solar Terrestrial Relations Observatory-A back on Earth was watching the star when it blew its top as well. Here’s what that same blast looked like from the telescope:

NASA expects that the Solar Orbiter will enter its full science mode sometime in November. At that point, the orbiter will be collecting a lot more data than it currently does, and scientists back on Earth will be able to study the behavior of our star in new and exciting ways.