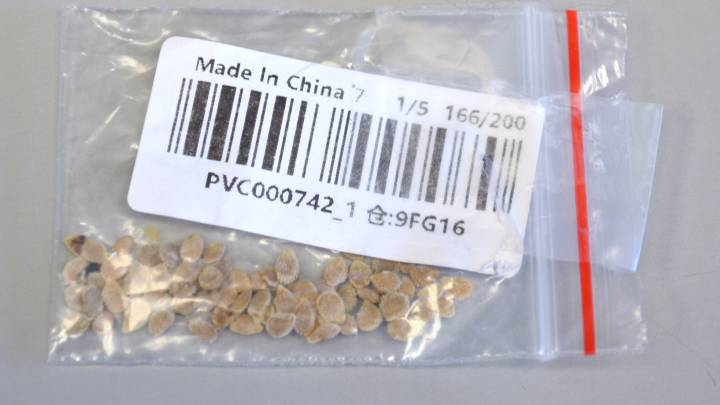 As if battling a global pandemic wasn’t enough, some citizens in the United States are now dealing with a very different kind of attack, and it’s being carried out through the mail. Individuals across the country have reported receiving packages of unidentified seeds out of the blue, and the shipments appear to be originating from China.

States have been issuing warnings to their residents, begging them to not plant the seeds as they may be an invasive species that could wreak havoc on native plants. Of course, not everyone is following those directions, and as The Sun reports, an Arkansas resident decided to see what the seeds would produce.

Doyle Crenshawn of Booneville, Arkansas, decided to stick the seeds in the ground “just to see what would happen.” He noted that after planting them, he fertilized them regularly and they “just started growing like crazy.”

The result? The plants produced a white, squash-like fruit along with orange flowers, according to Crenshawn. What it is, and whether or not it’s an invasive species are questions that remain unanswered, but needless to say, this is all very bizarre.

The USDA is working to collect unsolicited seed shipments and determine what kind of plants they are, but officials believe that the seed deliveries are part of an online scam by sellers on sites like eBay and Amazon.

Here’s how the scam plays out: Sketchy sellers online create fake accounts and then use those accounts to buy their own products. They send the packages out and then leave positive reviews for themselves. The addresses they send them to are real, so the recipient at the address gets the package without knowing where it came from.

At least some of the seed shipments have been labeled as other products on the external packaging. Some packages arrive stating that they are “earrings” or other items when the shipments actually contain seeds. A report from CBS suggests that the scam is playing out all across the United States, with individuals in every state claiming they’ve received packages of seeds.

“USDA urges anyone who receives an unsolicited package of seeds to immediately contact their state plant regulatory official or APHIS State plant health director,” the USDA said in a statement. “Please hold onto the seeds and packaging, including the mailing label, until someone from your state’s department of agriculture or APHIS contacts you with further instructions. Do not plant seeds from unknown origins.”

Needless to say, if you end up on the receiving end of one of these mysterious packages, don’t plant the seeds. Follow the USDA’s advice and forward the unsolicited seeds to local officials so they can investigate.