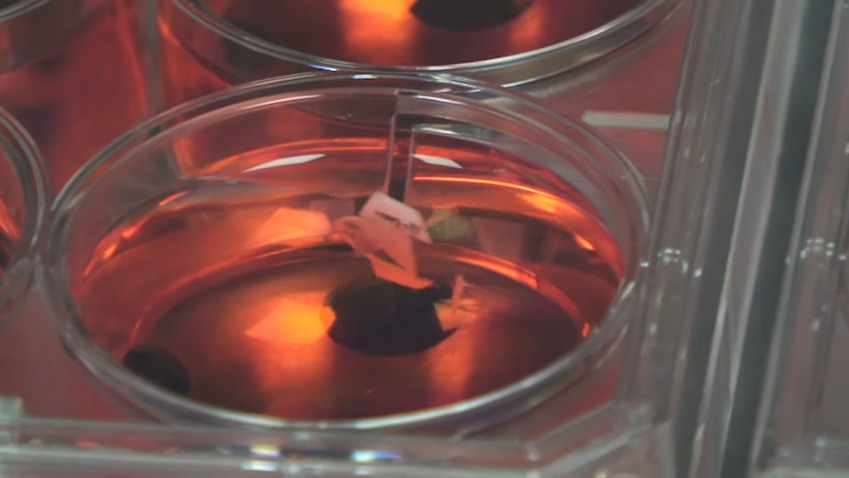 We’ve already seen scientists creating robotic fish to fight cancer. But now, a group of engineers at Harvard has created a cyborg fish made from human heart cells. The fish is modeled after a zebrafish and can move its side to side as it swims around. The idea is still in the early stages, but the researchers have published a study on it. They’re also hopeful about where their work could lead in the future.

Kevin Kit Parker, a professor of bioengineer and applied physics at Harvard, says the initial idea came during a trip to the aquarium with his daughter. The two were watching a group of jellyfish swim, and Parker says he immediately saw the resemblance between the muscular pump the jellyfish use to move and the muscles that work the heart. So, he and his team at Harvard began work on a jellyfish made from a rat’s heart cells.

After a measure of success, though, they moved on to the next project. While on another trip to the aquarium, Parker says he and his daughter were visiting the manatees. It was here that he got yet another idea. This time the team made a manatee using rat heart cells. With two successes behind them, the team decided to move on to the next step: Making a cyborg fish out of human heart cells.

Parker says the idea was to take stem cells and mature them in dishes. Then, they would make them able to move around fluidly. They accomplished this by creating a special automated pacemaker they call the G-Node. To kick things off, the G-Node sends a tickle of power through it. This tickle turns into a wave, though, and that is what gets the heart cells in the cyborg fish moving. With the G-Node attached, the fish were able to swim around on their own for nearly five months. Completely autonomous.

Of course, the most intriguing thing about this discovery isn’t just the cyborg fish. After all, what purpose would a fish like this truly have? Instead, Parker says the idea is to find a good way to build muscular pumps. That’s why they moved on the human cells for the zebrafish. By using human heart cells, they could create a muscular pump that could be put into sick people. This would provide treatment opportunities for people that currently don’t have other options.

Parker says the cyborg fish is a great control experiment. Plus, he lets him see how good he and his team are at building muscular pumps. Something that is imperative if they ever want to put something like this into a living person.