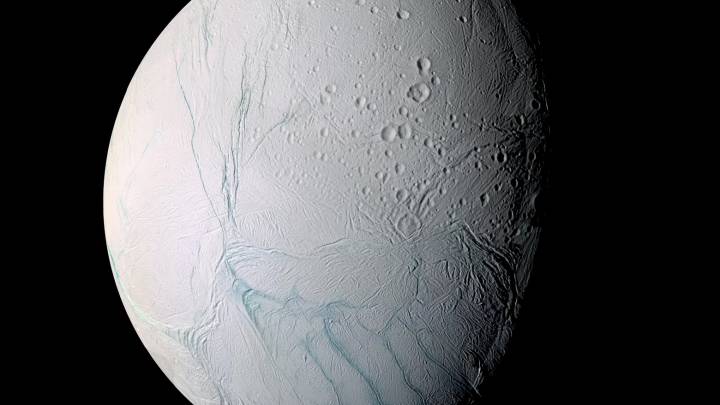 NASA doesn’t usually hold news conferences for minor discoveries or observations, so when the agency announced that it would be holding a press conference this week to talk about oceans on other planets, we knew it had to be something particularly interesting. Well, the event just wrapped up and to call the news “interesting” would be an incredible understatement. NASA just revealed that Enceladus, a moon of Saturn, appears to have everything it needs to support oceanic life. Woah.

Enceladus, which measures 313 miles across, is only the sixth largest of Saturn’s moons, but when it comes to the search for life it’s already the most exciting. It’s a frigid world with a thick layer of ice completely covering it, but past observations of the moon have revealed huge geysers of water spewing from its surface, meaning that there’s liquid water hidden beneath.

When the Cassini orbiter took a cruise through one of those plumes of water it discovered a significant amount of molecular hydrogen, which sciences believe is likely being created by reactions between water and extremely hot rock at the moon’s core. With ice on its surface and steamy reactions happening at its core, that means there’s a huge range of water temperatures in between, which substantially increases the chances that life could be supported there.

The combination of energy and elements is a tantalizing mix that has researchers very excited, but it’s also only a blueprint for life being supported, and that’s a far cry from confirmation that it’s actually there. And, even if it is, it may well be microbial, which would still be a groundbreaking discovery, but not exactly the kind of thing you see in a sci-fi movie. In any case, the news is exciting, and could be enough to prompt further research and perhaps one day a trip to Enceladus itself.