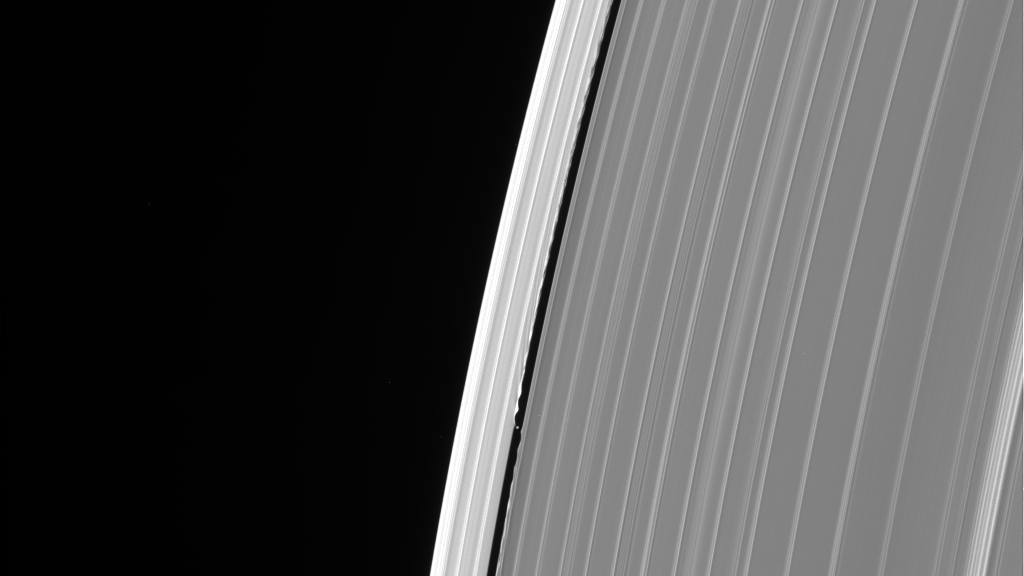 NASA’s Cassini spacecraft completed its incredibly successful extended mission last week, punctuated by a fiery death at the hands of Saturn’s upper atmosphere. But just before the orbiter bid farewell it captured an image of an area of Saturn’s rings that scientists still can’t fully explain, and it’s a tantalizing glimpse at one of the planet’s most puzzling features.

It’s called Peggy, and it’s a shifting spot on the edge of one of Saturn’s rings that breaks up its otherwise perfect appearance. In photos, it appears as a bright bump, causing a disturbance in the smooth ring edge, but researchers still haven’t agreed on an actual explanation for what it is or why it’s there.

The feature was named for the mother-in-law of Cassini team member Carl Murray, due to its initial discovery landing on Peggy’s birthday back in 2013. Speaking with Gizmodo, Murray explains the team’s fascination with the odd disturbance.

“What is it? Where did it come from? Where is it going? We’ve been tracking it almost ever since,” Murray says. “We’ve never actually resolved the object. All we can do is track the glitch.”

One of the early guesses was that the bumps could be the result of a moon or other large object messing with the materials in the ring, but that theory was abandoned due to the fact that the object would have to be so large it would have caused even more chaos. At the moment, the most likely alternative is that the disturbance is the result of a chunk of debris that is traveling throughout the ring, messing up its perfect appearance.

Cassini’s final snapshot of the feature is the best look scientists have ever had at the glitch, and will remain so for some time. For now, the mystery will have to remain unsolved.