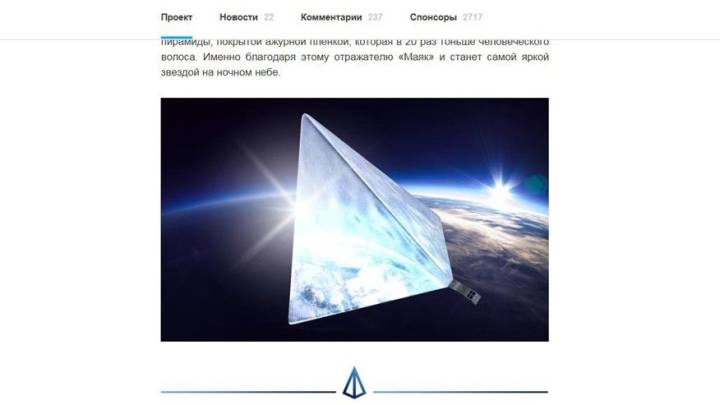 Russia is set to launch potentially the brightest artificial object in the night sky, which could outshine everything except for the Moon, starting next month.

Mayak, a Russian CubeSat (a type of miniaturized satellite) will be fitted with solar reflectors. According to experts, if the miniature satellite is launched, it could have an apparent magnitude of -10, New Atlas reports whereas the Moon ranks between -13 and -12. Celestial bodies are measured based on their brightness, with the brightest objects receiving the lowest scores.

For comparison, the Sun has an apparent magnitude of -27.

The CubeSat would be brighter than other objects in the sky, such as the International Space Station or Venus, which have apparent magnitude scores of -6 and -5, respectively.

This could disrupt astronomers who rely on a dark night sky for their research.

“We fight so hard for dark skies in and around our planet,” Nick Howes, an astronomer and former deputy director of the Kielder Observatory in Northumberland said in an interview with IFLScience. “To see this being potentially ruined by some ridiculous crowd-funded nonsense makes my heart simply despair.”

There are some differences of opinion about the potential brightness of the CubeSat, with IFLScience predicting a magnitude of about -3.6, which would still make it one of the brightest objects in the sky.

Mayak would be visible in the U.S., as well as other parts of the world.

The small satellite was designed by students from Moscow Polytechnic and weighs less than 8 pounds, composed of only a power source, control system and the aforementioned solar reflectors.

The project has raised more than $30,000 on Russian crowd-funding site Boomstarter, similar to the U.S.’s Kickstarter.

With the project, the students want to show that space can be accessible to small scientific teams for little cost. In addition, the students will also test an aerodynamic braking device at the end of the CubeSat’s run, with it ultimately sent off into deep space.