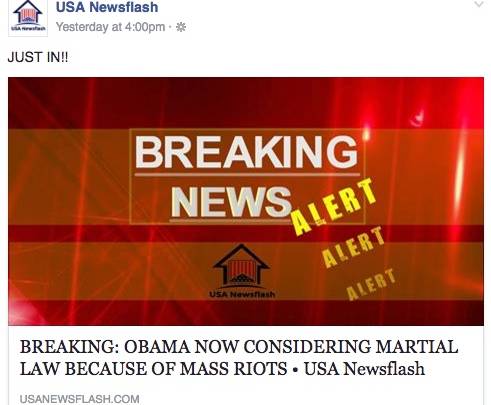 The problem of fake news and the US election has been reported to death by this point. We’ve blamed Facebook, Google, the fake news writers, and the world’s racist Facebook-sharing uncles by this point.

But one group that hasn’t been blamed yet is the Russians, and it’s about time that we did something about that. The Washington Post has seen a report that claims Russian propaganda websites were responsible for reaching 15 million Americans with fake news stories in the run-up to the election, and in a close race, that could feasibly have changed the outcome of the election.

The report claims that botnets, social media accounts and teams of bloggers were used successfully to push traffic to more than 200 Russian-run fake news websites. Among other things, those sites repeatedly ran fake or inflammatory stories about Clinton’s health, the election being rigged, and protesters being paid to protest Trump.

While some news outlets have tracked down individual fake news websites run by individuals looking for profit, this report claims a greater level of coordination between hundreds of different sites. It saw the same langauge in social media posts from different sites, and the same message being pushed in a seemingly coordinated manner. “The way that this propaganda apparatus supported Trump was equivalent to some massive amount of a media buy,” the report’s author said.

The report does acknowledge that while some of the social media sites seem to be directly controlled by one entity, others might just be “useful idiots” who believed the stories being peddled.

It’s difficult to specifically attribute a propaganda campaign like this to one group or nation, thanks to the level of anonymity provided by the internet. But given Russia’s previous suspected meddling with the election process, some kind of state-fuelled propaganda attempt wouldn’t be a surprise by this point.