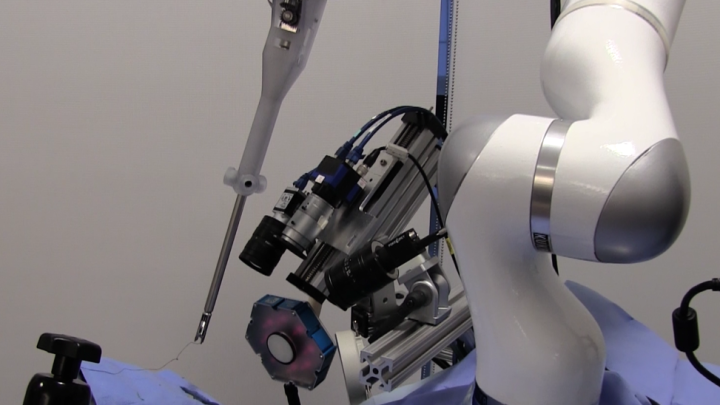 Human surgeons are some of the most skilled, precise individuals on the planet, but no amount of training and experience can make them better at slicing human flesh than robots already are. A new study aimed at comparing the steady hand of a human surgeon against the cold precision of the Smart Tissue Autonomous Robot (STAR) revealed just how much better a bot really is, and what that means for patients going under its knife.

The research pitted the surgical bot, which is still in active development, against a human surgeons operating on a human analog — in this particular case, it was pig tissue including muscle, fat, and of course skin. The cuts made by both the human doctors and the STAR were judged based on how precise their cuts were as well as how much damage was done to the flesh surrounding the incision. The result? Well, you can probably guess…

The STAR system not only produced more precise cuts in terms of length, but they were also closer to the “perfect” line and the incision caused less damage to the flesh. In short, the robot completely blew away the human surgeons at their own job.

For anyone who has even casually followed the developments of medical robots, that’s probably not all that surprising. That is, until you hear that STAR could one day be completely autonomous. Yep, that’s right: this ultra-precise robot surgeon may soon be performing procedures all on its own.

“I really believe that this is the future of surgery,” study coauthor Axel Krieger, assistant professor of mechanical engineering at the University of Maryland, told IEEE Spectrum. “I believe this will come about first for small sub-functions of surgery and get more and more complex. Similarly to autonomous cars, where small features such as brake-assist slowly morphed into more and more autonomy. I absolutely would trust a robot like that for my surgery, once it is fully developed and validated.”