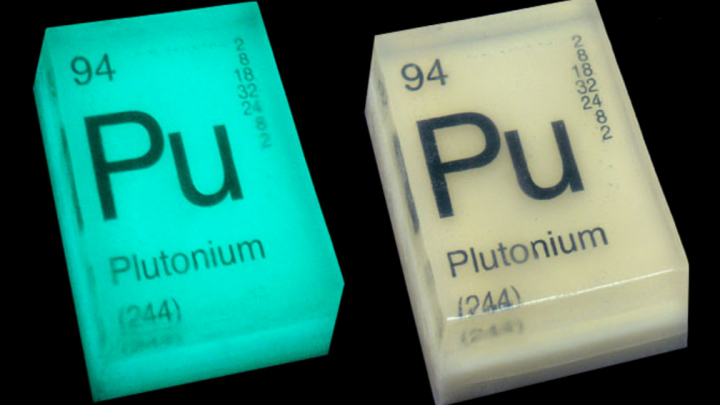 Your bathroom is probably the most boring place in your house — unless you’re one of those people that has the multi-person walk-in showers with like 10 different nozzles that envelop you in a storm of amazing cleanliness — but it doesn’t have to be. Adding some glow-in-the-dark plutonium soap will definitely spice up the joint a little, though its use cases are probably somewhat limited.

The glowy bar, which is perfectly acceptable as hand soap or to toss in the shower, took Reddit by storm, and it’s sold by a company (fittingly) named United Nuclear. The company specializes in all kinds of science supplies and equipment, and they have plenty of quirky gift-like items as well, which is where this soap comes in.

“Vegan-friendly, contains no animal products and of course contains no actual Plutonium, just a little of our safe, non-toxic aqua glow pigment,” the site description reads. “Plutonium soap bar has data printed in it from the periodic table and glows aqua in color. A great gift for anyone interested in science/chemistry/technology/nuclear stuff. Made with our Europium UltraGlow®, non-toxic, non-radioactive, glow-in-the-dark pigment.”

So, it’s bare-bones soap with some funky lettering and an awesome glow effect. There’s no arguing that it’s pretty neat, but I’m personally having a hard time imagining a scenario where I’d even get the chance to use the soap when it’s glowing. Like most glow-in-the-dark products, it needs light to charge it up, so unless you’re going to shine a flashlight on it then take it into a dark shower, it might not be all that cool.