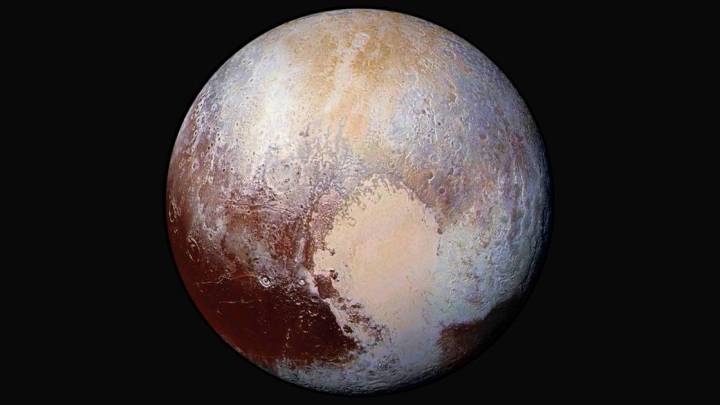 It’s been a rough couple of decades for Pluto. After over a decade of discussion about whether or not it should be considered a planet, the big ball of ice and rock was officially demoted in 2006, and debate has raged over its status ever since. Despite its new, somewhat less prestigious classification as a dwarf planet, NASA is still mighty interested in what Pluto might be hiding. Now, NASA researchers are suggesting that a vast ocean might be tucked away under Pluto’s icy crust and, in a rare move, they’re even suggesting that Pluto may support life deep below its surface.

The key factor in Pluto’s potential to support liquid water beneath its surface, and thereby life, is the existence of its moons. As NASA explains, recent research has revealed that icy worlds that are orbited by moons may benefit from what is known as tidal heating. Put simply, the gravitational pull of a moon on a planet (or dwarf planet) can produce enough frictional energy deep within its icy body to generate heat and sustain a sub-surface ocean.

Trans-Neptunian objects (TNOs) like Pluto are so far away from the sun that the heat from the star simply isn’t enough to keep a surface ocean from freezing solid, but tidal heating might still allow liquid water to slosh around underneath. After objects like Pluto formed, radioactive decay may have produced the initial heat to form the ocean from water ice, but once the surface froze it would need the friction of gravity to keep it from going solid once more, much like a fast-moving stream can fight off freezing temperatures. That’s incredible news for anyone who still dreams that scientists will one day locate extraterrestrial life right here in our own backyard.

“These objects need to be considered as potential reservoirs of water and life,” Prabal Saxena of NASA’s Goddard Space Flight Center explains. “If our study is correct, we now may have more places in our solar system that possess some of the critical elements for extraterrestrial life.”

At present, there are no concrete plans to explore the possibility of liquid water or life hidden away beneath Pluto’s surface, but that could change. All eyes are on Saturn’s ice-covered moon Enceladus at the moment, and we already know a water ocean exists beneath its surface thanks to geysers observed spewing water into space. The moon’s liquid water is thought to benefit from tidal heating as well, and if scientists decide to investigate further, Pluto might be next on their list.