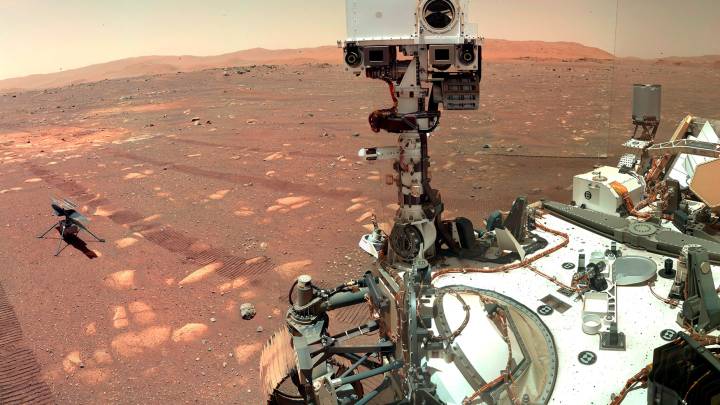 NASA’s Perseverance rover landed on Mars way back in February. Just moments after its safe touchdown, the massive machine sent back images of the Martian surface and began relaying all kinds of data so that its handlers back on Earth knew it was doing okay. With that quick start, you’d think that the rover would be well into its science campaign by now, but in truth, it’s only just beginning.

Perseverance is a big, complex machine with a lot of high-tech hardware built-in. Like any responsible space agency, NASA had to follow its own strict guidelines on how the first weeks and months of its mission were going to play out. For Perseverance, it meant lengthy tests of its various sensors and motors, but even that wouldn’t have been enough to delay the science phase until June. So what caused the large gap between landing and science investigation? Ingenuity.

Perseverance wasn’t the only NASA machine that touched down on the Red Planet in February. The Ingenuity helicopter, which rode to Mars on the belly of Perseverance, also arrived in one piece. The helicopter, while small, was an extremely important part of the Mars 2020 mission, and NASA wasted no time in deploy it so that flight tests could begin.

The key here is that Ingenuity required Perseverance to remain nearby in order to relay data back to Earth. The large rover also served as an observation tool for the flight tests, sending back its own images and video of the helicopter in action so that the Ingenuity team knew how well it was performing. Ingenuity surpassed expectations and has demonstrated that powered flight on Mars isn’t just possible, but it may also be the best way to explore large stretches of the Red Planet in an efficient manner.

Needing to stay within shouting distance of Ingenuity meant that Perseverance couldn’t do the kind of exploring it might have otherwise have been able to. That didn’t stop the rover from testing out some of its most exciting tools, however, and the rover has already relayed the first Martian audio and over 75,000 photos, according to NASA. Now, the rover can officially begin its science phase, and the rover team is excited.

“We are putting the rover’s commissioning phase as well as the landing site in our rearview mirror and hitting the road,” Jennifer Trosper, project manager of Perseverance, said in a statement. “Over the next several months, Perseverance will be exploring a 1.5-square-mile [4-square-kilometer] patch of crater floor. It is from this location that the first samples from another planet will be collected for return to Earth by a future mission.”

It’s an incredibly exciting time for science fans and NASA alike. We don’t yet know what kind of things Perseverance might find in the Jezero crater, but we’re all eager to find out.