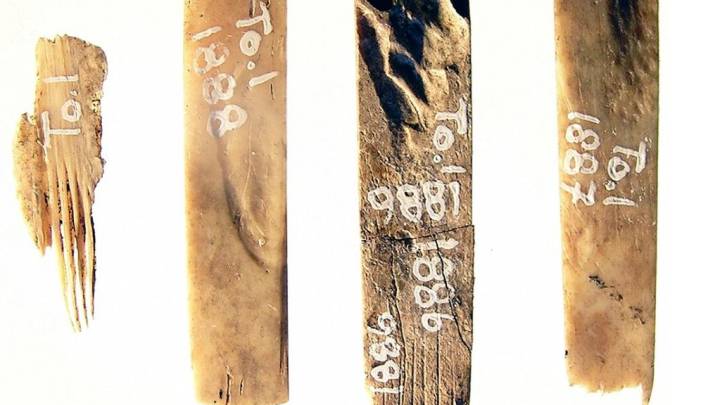 Today, tattoos are so common that we don’t really even consider their significance. You see someone with a flower on their arm or something and never give it another thought, but tattooing is a huge part of many cultures and tattooing traditions stretch back for centuries.

Many Pacific island nations hold tattoos in high regard, and a new research effort to date some ancient tattooing implements found decades ago reveals that the practice is thousands of years old. The study, which was published in The Journal of Island and Coastal Archaeology, focuses on four tiny pieces of bone that were once thought to be lost forever.

The tiny bone fragments were originally discovered in the 1960s during an excavation on the island Tongatapu, the heart of the island kingdom of Tonga. At the time it was unclear what their significance might be, but they were kept in safekeeping for scientists to study later.

Decades later, in 2003, a fire decimated the building where many of the found artifacts were held, and it would take another five years before researchers would rediscover them in a different facility. Miraculously, the tiny bone pieces had escaped destruction, and now scientists know exactly what they are.

The fragments are known as “bone combs.” Bone combs are flat pieces of bone that have been specially shaped to have sharp points on one side. Those sharp points act like the needle of a modern tattoo gun, only in this case the tattoo artist pushes the pigment into the person’s skin manually.

Radiocarbon dating of the tools suggests that they’re around 2,700 years old, which would make them the oldest tattooing tools ever found. The tools, which are thought to be made of the bones of birds and possibly also humans, still have tiny bits of ink embedded in them, leaving no doubt to their intended use.

“The kit most likely belonged to one tattoo artist,” Dr. Michelle Langley co-author of the research, said in a statement. “One tool was broken and it looks like it was being repaired, so perhaps the kit was accidentally left behind or was too broken to bother salvaging. Perhaps the tattooist was given a new set.”

What’s perhaps most interesting about the bone tools is that they’re not that different from modern manual tattooing instruments that are still in use today.