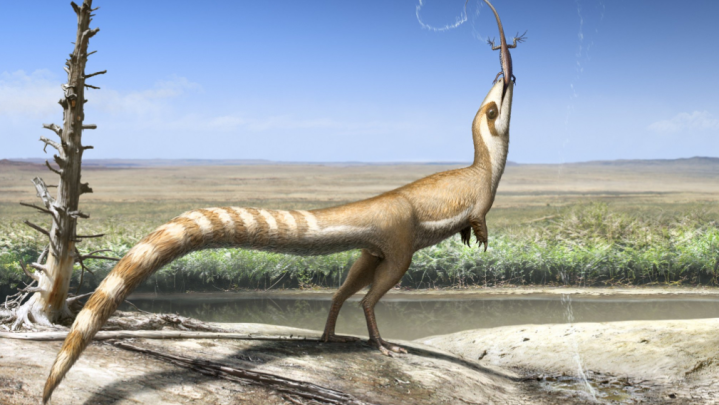 Imagine this: a large, feathered reptile with bold stripes and a colorful, raccoon-like face. Sound like something you’d probably see roaming around the world of Pokemon, right? Well it’s real, or at least it was. It’s called a Sinosauropteryx, and it lived here on Earth some 126 million years ago.

The very first Sinosauropteryx fossil was actually discovered way back in the mid 1990s, and it shook up the entire image of dinosaurs thanks to its apparent feathery coat. Now, a new research effort to learn more about the ancient species has given scientists a better understanding of exactly what it looked like, and man is it a weirdo.

Using the preserved remains from three different Sinosauropteryx fossils, paleontologists from the University of Bristol were able to figure out the colors of the dinosaur’s fancy feathers. They learned that its body was a light amber color, with lighter, off-white stripes that curled up and around the side of its streamlined head. With dark areas around its eyes and a lighter colored underbelly, it looks a whole lot like a raccoon, only in dinosaur form.

The research is interesting not just because it gives us a good idea of what the dinosaur looked like, but also because it could offer great clues as to what the environment also looked like at the time. Assuming the dinosaur’s pattern and coloring helped it blend into its surroundings, it’s not a stretch to think that the Sinosauropteryx spent its time in areas much like those of modern day animals that share similar color patterns, like gazelles.

“We knew before that its feathers were vibrantly patterned, but this study shows that it was countershaded and even striped,” Dr.  Steve Brusatte of the University of Edinburgh told the New York Times. “These findings breathe life into this dinosaur.”