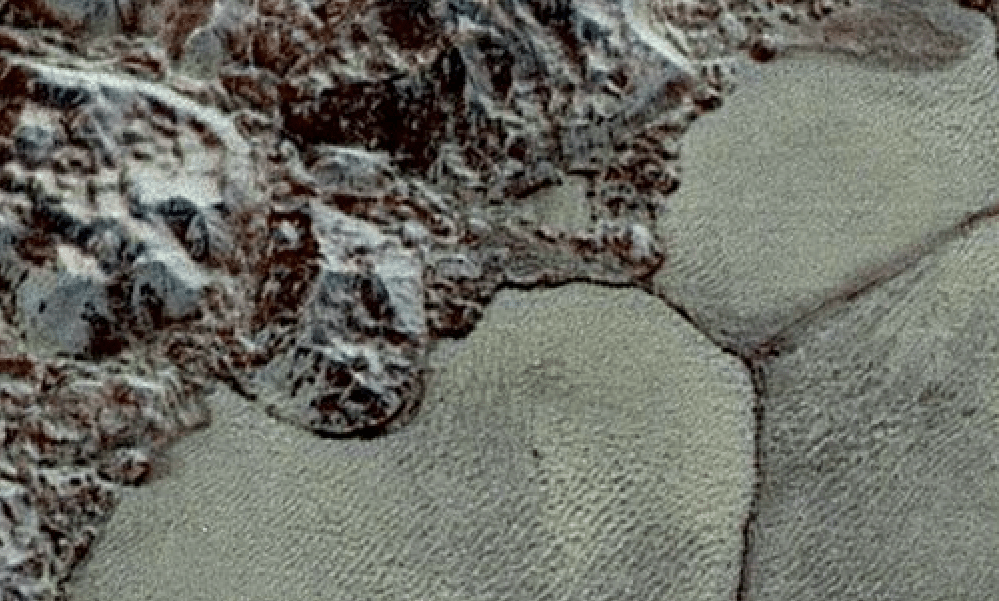 Pluto might not be an official planet anymore but that doesn’t mean the frozen world is any less interesting from a scientific perspective. The dwarf planet hangs out at the far reaches of the Solar System and it’s an incredibly chilly place to be. In fact, recent research has suggested that Pluto might be actually be the result of a collection of a billion or so frigid comets that crashed into each other, and a new scientific paper is helping to paint a more detailed picture of its remarkable surface features.

The work, which was published in Science, uses photographs captured by NASA’s New Horizons spacecraft which flew past Pluto way back in 2015. In the images, scientists have discovered evidence of what appears to be sandy dunes on the surface. Well, it’s not actually sand at all.

The photos show an undeniably Earth-like landscape with mountainous terrain bordered by what appears to be a vast desert. Scientists already know that much of Pluto is actually frozen gasses forming solid material. The researchers write that this “sand” as we see it isn’t tiny bits of rocky material like we’re used to here on Earth, but actually frozen methane particles that have gathered into dune-like shapes.

“The methane grains could have been lofted into the atmosphere by the melting of surrounding nitrogen ice or blown down from nearby mountains,” the researchers explain. “Understanding how dunes form under Pluto conditions will help with interpreting similar features found elsewhere in the solar system.”

This is a surprising finding for a number of reasons, but the most important takeaway is that the surface conditions of the planet might not be what scientists had long assumed. With an incredibly thin atmosphere, features like dunes that we typically associate with windy conditions shouldn’t really be possible. But you can’t argue with a photo, so scientists are working on coming up with other explanations.

“The surface of Pluto is more geologically diverse and dynamic than had been expected,” the paper reads. “But the role of its tenuous atmosphere in shaping the landscape remains unclear.”