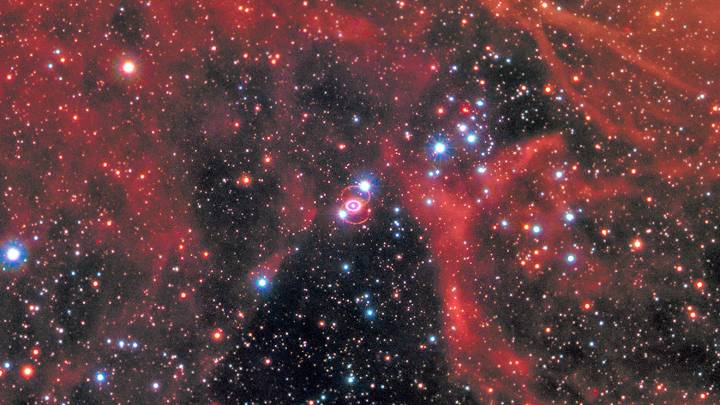 To celebrate the 30th anniversary of the discovery of massive supernova called SN 1987A, NASA pointed the lens of the Hubble Space Telescope in its direction once again, snagging an updated photo, but that’s not all the agency has to offer. NASA is really great about releasing stunning images of the awesome sights it manages to capture out in the depths of space, but its latest release takes things to a whole new dimension.

Along with the gorgeous photo — which you can check out above in in its full resolution at this link — NASA built a 3D model of the supernova in its current state, blasting a colossal amount of star matter in all directions.

Scientists have been keeping a close eye on SN 1987A for decades in the hopes of learning more about the changes a star undergoes as it passes into its final stage. “The 30 years’ worth of observations of SN 1987A are important because they provide insight into the last stages of stellar evolution,” Robert Kirshner of the Harvard-Smithsonian Center for Astrophysics said of the anniversary.

NASA has detected the dimming of X-ray images of the supernova in recent years, suggesting that SN 1987A’s “blast wave” has finally gotten ahead of the material the massive explosion expelled. It’s an important discovery and contributes to humanity’s understanding of how supernovas evolve, but astronomers remain focused on the center of the ring in the hope of spotting either a black hole or a neutron star, one of which may have spawned from the remains of the dying sun.