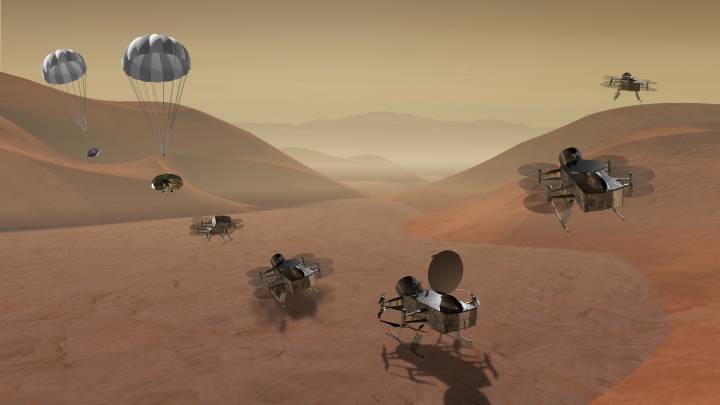 Drones might be all the rage amongst hobbyists and techies here on Earth, and NASA seems to have caught the bug. The agency is currently exploring the possibility of sending a specially-built drone to Saturn’s largest moon, Titan, where it would provide scientific observations and fly through the alien skies in a way that no piece of human technology has before.

The drone, which is the star of the aptly-named “Dragonfly” mission proposal, would stand in stark contrast to the current crop of planet-exploring hardware NASA, which consists of probes and slow-moving rovers. Rather than crawling along the dirt like NASA’s fleet of Mars rovers, the drone would be capable of rapid relocation which would allow it to explore entirely new areas in very short periods of time.

Despite the conditions of Titan being quite a bit different than that of Earth, the Dragonfly drone would look quite similar to quadcopters already popular among drone enthusiasts. With four stacked rotors situated on its corners, the craft would be built specifically to navigate in Titan’s thick atmosphere and extremely low gravity. Titan’s gravity is just 14 percent of what we experience on Earth’s surface. That soft pull is actually even less than what is experienced on the surface of Earth’s moon.

Even when it’s not flying the drone would be hard at work, and the Dragonfly team is currently fleshing out what its mission goals would be if it is given the go-ahead. The drone would be designed to analyze atmospheric conditions as well as the chemistry of its surface in an attempt to gauge potential habitability.

The Dragonfly mission is one of just two that NASA will have to decide between by the middle of 2019. The other potential mission focuses on a nearby comet for sampling and analysis, and both it and the Dragonfly group will be receiving a $4 million funding boost in order to better flesh out their proposals. NASA will ultimately decide which one to pursue, but that won’t be until next year.