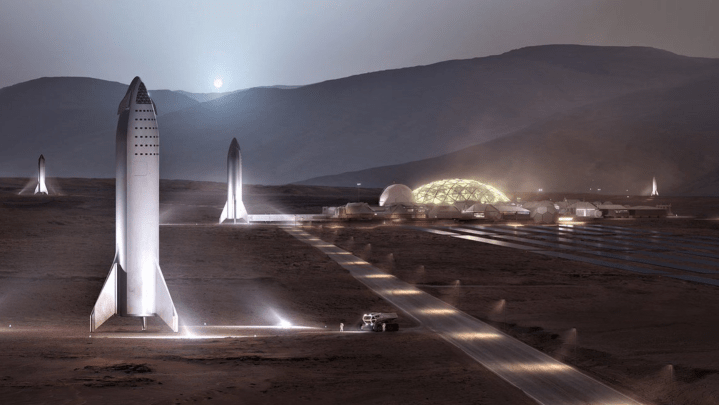 Never let it be said that Elon Musk isn’t one heck of an optimist. The SpaceX boss has been doing a whole lot of forecasting in recent months, painting vague timelines for when his company will be ready to launch its powerful Big Falcon Rocket and even send paying passengers around the Moon. Now, in a recent tweet, Musk has teased what seems to be a Mars colony that would be facilitated by SpaceX rockets.

Calling the concept simply “Mars Base Alpha,” the render is pure fiction… at least for now. There’s a collection of pod-like structures, what appears to be a large solar array, and even a transparent dome completely with living vegetation inside. There’s also no fewer than four SpaceX BFR rockets just chilling out, awaiting passengers.

It’s all pretty ambitious, especially when you consider the fact that the BFR doesn’t actually… exist yet. SpaceX has done some amazing things with its Falcon and Falcon Heavy, but the BFR is still going through its early testing phases and has yet to even see a trial launch.

NASA is waiting on both SpaceX and Boeing to deliver a crew-capable vehicle for sending astronauts to the International Space Station and both have already faced significant delays. SpaceX’s first priority should of course be fulfilling its promise to NASA and other current customers, but that’s not stopping Musk from looking far into the future.

How far, exactly? A follow-up tweet asking when the render will become a reality was met with a vague window of “probably 2028.” Whether Musk is targeting 2028 for the base to be ready or for construction to begin is unclear, but the latter is obviously much more likely. Nobody has ever built anything on Mars — or any other planet — so assuming we’re a decade away from a settlement on the Red Planet is foolhardy at best.

Space agencies and private companies from around the world are definitely betting on Mars being mankind’s first foray into extraterrestrial colonization, but plenty of obvious challenges have already presented themselves. Going forward, totally unforeseen hardships will certainly arise, and it’s difficult to put any weight on forecasts at this point.