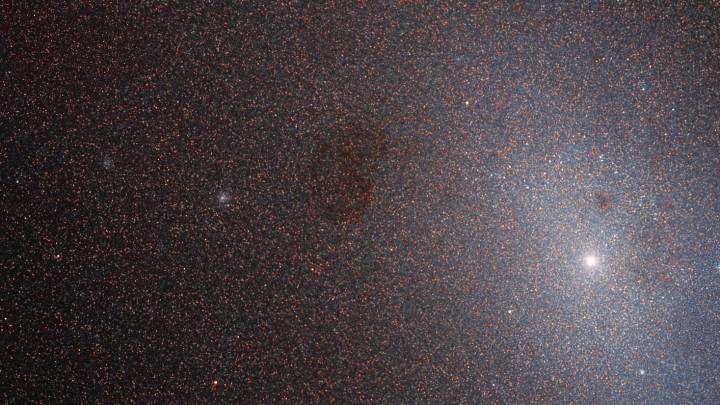 Galaxies come in all shapes and sizes, and the galaxies most pleasing to the eye are always in the most recognizable shapes. Dramatic spirals with outstretched arms, bursting with newborn stars are always a jaw-dropping sight, after all. Messier 110 is most definitely not in that group.

Messier 110 is what is known as an elliptical galaxy. It doesn’t have well-formed features, and it’s not a swirling mass of eye candy. It’s just a big blob of stars hanging out around the nearby Andromeda galaxy. As far as galaxies go, it’s rather small, but NASA’s Hubble Space Telescope has a certain knack for making even “small” destinations in space look larger than life.

As NASA explains, this photo of Messier 110 reveals the galaxy’s true personality. It’s not particularly flashy or fun, but it is absolutely packed with stars, and while there are no obvious star nurseries to be seen, scientists think new stars are still being born here.

Here’s what NASA had to say:

Because they lack stellar nurseries and contain mostly old stars, elliptical galaxies are often considered “dead” when compared to their spiral relatives. However, astronomers have spotted signs of a population of young, blue stars at the center of Messier 110 — hinting that it may not be so “dead” after all.

Scientists have been studying the ways galaxies are born, grow, and die for a long while, but there are still so many things we don’t know about the process. Observations suggest that Messier 110 is a nearly-burnt-out galaxy packed with old stars, but can such galaxies be reborn into something new, or are they merely waiting to be swallowed up by even larger galaxies like Andromeda?

These are things we still don’t know, and because the events take billions of years to unfold, we may never truly understand how it all works. At least we can enjoy the view.