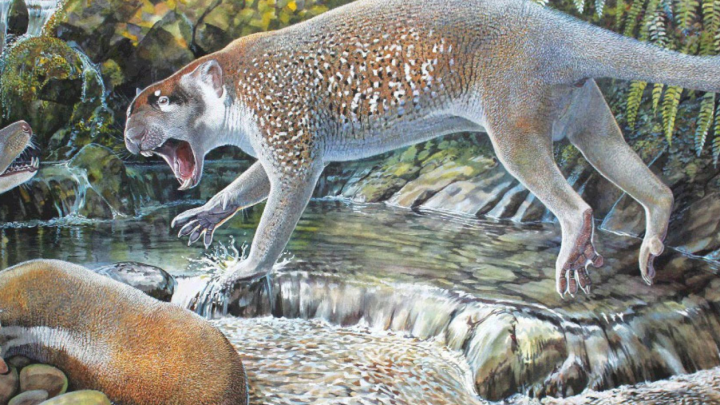 Australia is a weird place. Because of its location and that fact that life there has evolved in a vacuum — isolated from much of the rest of the world since the breakup up of the continents — many species that have lived and died there over millions of years have no equal anywhere else on the planet. A newly discovered species of marsupial that lived some 19 million years ago is helping to reenforce that notion even further, and it would have been a pretty frightening creature to run into.

The creature, named Wakaleo schouteni after its discoverer, paleontologist Peter Schouten, was like a miniature lion, with teeth made for slicing meat and a sturdy frame no larger than that of a dog. Weighing in at around 50 pounds when full grown, the unique animal is helping to draw a vivid picture of what life may have been like in Australia tens of millions of years in the past.

A paper on the discovery, published in the Journal of Systematic Palaeontology, describes an animal unlike any documented outside of Australia. The pint-sized lion is thought to have been a carnivore, with powerful jaws for rending flesh from bone and sharp, “blade-like” teeth that would have allowed it to make short work of it prey. It might not have been the biggest predator around, but it would have been a formidable foe for many of the species it preyed upon.

The animal isn’t the first four-legged marsupial carnivore discovered in Australia’s fossil record, with the much larger Thylacoleo carnifex having dominated the food chain some 30,000 years ago. A smaller species of marsupial lion is also known to have lived around the same time as W. schouteni as well. After studying the dental features of both long-extinct animals, scientists now believe they were indeed independent species, rather than one being an evolutionary offshoot that came later.

“The identification of these new species have brought to light a level of marsupial lion diversity that was quite unexpected and suggest even deeper origins for the family,” lead author Dr Anna Gillespie of the University of New South Wales explains.