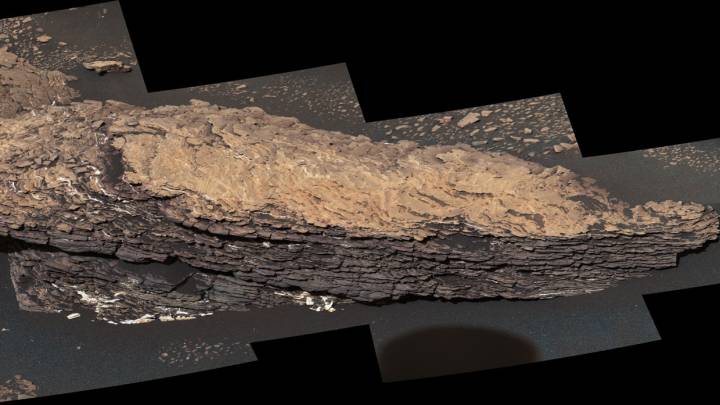 We tend to think of rocks as being, well, pretty boring. We find them pretty much everywhere here on Earth, and while some are neat to look at we don’t often spend the time to consider the stories they can tell. For the scientists working with NASA’s Curiosity rover, however, rocks are like windows into the past of a planet we still know relatively little about.

The Curiosity rover is currently exploring an area within the Gale Crater called the “clay-bearing unit.” NASA highlighted a panorama snapped from this location as the agency celebrated the robot’s 7th year on the Red Planet, but one rock in particular is worthy of additional attention. It’s been nicknamed “Strathdon” and it’s telling researchers a lot about what Mars was like when it was a whole lot wetter.

The rock looks like a thick collection of flaky fragments. Its delicate features were formed over a long stretch where clay was deposited and hardened before each new layer accumulated. Curiosity has seen sediment formations on Mars before, but this rock has a unique, wavy personality.

As NASA explains, this is believed to be evidence of flowing water, blowing wind, or perhaps a combination of the two.

“We’re seeing an evolution in the ancient lake environment recorded in these rocks,” Valerie Fox of Caltech said in a statement. “It wasn’t just a static lake. It’s helping us move from a simplistic view of Mars going from wet to dry. Instead of a linear process, the history of water was more complicated.”

An ancient stream of water cascading over a warmer Mars with a thicker atmosphere sure sounds like a recipe for life, but scientists can’t make that call just yet. Curiosity has discovered that the planet would have been suitable for microbial life long ago, but researchers can’t confirm the existence of Martian life. Not yet, anyway.