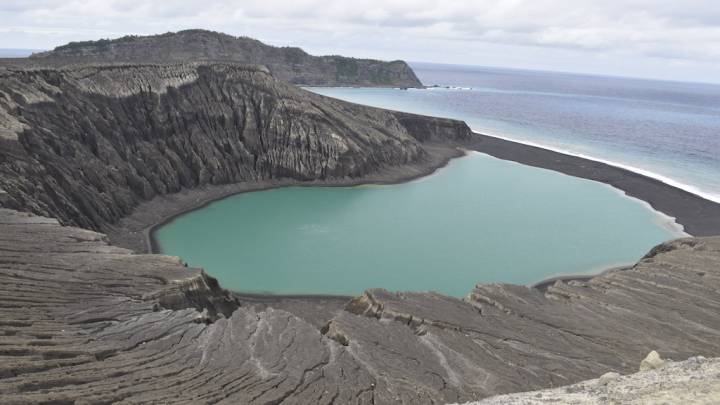 It’s not often that a whole new chunk of land just comes jutting out of the ocean, but that’s just what happened with a new island in the South Pacific. A large undersea volcano blew its top in late 2014, shooting rock and ash skyward, and once everything calmed down an entirely new island had been formed. Now, NASA is looking at the newly formed landmass for possible hints at how the landscape of Mars behaved billions of years ago.

The new island, which is being referred to by the unofficial name Hunga Tonga-Hunga Ha’apai, didn’t seem to have a bright future when it first emerged in the wake of the volcano’s fury, but researchers now believe it actually might stick around for quite a while. New data suggests it might even last as long as 30 years.

“Everything we learn about what we see on Mars is based on the experience of interpreting Earth phenomena,” Jim Garvin of NASA’s Goddard Space Flight Center explains. “We think there were eruptions on Mars at a time when there were areas of persistent surface water. We may be able to use this new Tongan island and its evolution as a way of testing whether any of those represented an oceanic environment or ephemeral lake environment.”

Heat, liquid water, and a suitable atmosphere are thought to be some of the most crucial ingredients for life as we know it. If Mars was once dominated by an ocean, and if that ocean experienced volcanic activity as ours do here on Earth, that’s very good news for anyone who dreams of one day hearing that life did exist on Mars.

In its present state, the island is essentially a huge pile of volcanic ash and rock which is slowly eroding into the ocean from which it was born. Storms and wave activity have already pushed lots of material back underwater, but a large portion still remains. On Mars, despite billions of years of wind erosion and impacts from space rocks and debris, similar volcanic features still remain, and the newly born island is helping to inform astronomers about what the martian surface may have looked like a long time ago.