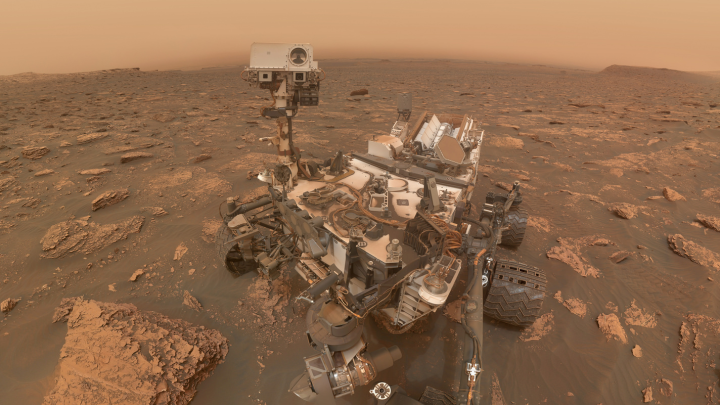 Mars isn’t a great place to be right now. Well, it’s really never a great place to be, at least not for the past billion years or so, but the past few weeks have been especially rough as a massive dust storm is rapidly swallowing up the planet. The storm has already caused NASA’s Opportunity rover to shut down due to lack of sunlight, and now as the storm spreads towards Curiosity, NASA took the opportunity to grab a pretty awesome rover selfie.

The image, which was captured in bits and pieces and then stitched together by NASA and the Jet Propulsion Laboratory to create an “armless” selfie, shows the dusty rover sitting quietly on the Mars landscape as the sky slowly turns a burnt orange.

The severity of the dust storm near Curiosity doesn’t really compare to what Opportunity is currently experiencing. As NASA previously stated, the Opportunity rover has essentially witness day turn to night, with little to no sunlight filtering down to the robot and leaving its solar panels and batteries craving energy.

As you can see by the image — which was touched up by digital artist Seán Doran and posted to Flickr — Curiosity can at least still see its surroundings, even if everything is bathed in an orangish hue.

NASA still doesn’t know the extent to which Opportunity has been permanently affected by the storm, and may not know for several more days. The rover is getting up there in terms of age, approaching its 15th year despite only being intended for roughly 90 days of use.

The rover entered a low-power standby mode when the dust storm obscured the sun, and it only wakes up every so often to see if its batteries have been recharged. Once the skies clear and the rover’s solar panels can give it enough juice to stay awake, NASA will be able to assess any damage that might have occurred.

According to NASA, the atmospheric opacity over the Opportunity rover sits at 10.8. For comparison, anything between 0.0 and 1.5 is considered normal, and anything past about 4 is considered “dark.” Dust storms on the planet are somewhat predictable, but forecasting when they will eventually die down is an inexact science to say the least. For now, the rovers will just have to endure.