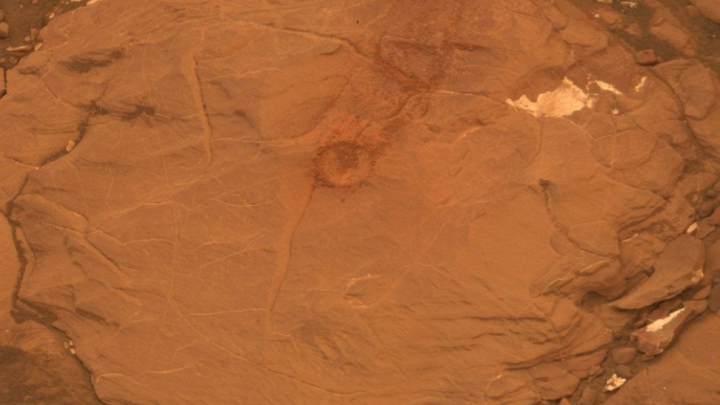 NASA’s Curiosity rover has been doing some fantastic work on Mars, and even though it had to basically reinvent how it uses its primary sampling tool it’s managed to get back to work anyway. Unfortunately for the rover’s handlers, one of the first new targets that they picked to drill into has actually managed to defeat the powerful tool.

In a new update on the Curiosity rover’s mission log, scientists reveal that the rock they were trying to steal a sample from is just too dang hard to pierce. The large rock, nicknamed Voyageurs, suffered barely a scratch from Curiosity’s drill bit, and it didn’t reach nearly deep enough to obtain a useful sample.

The scientists explain their hardships thusly:

After our attempt to drill the Voyageurs target did not reach sufficient depth due to the impressive hardness of the rock , the team is beginning to finish up its activities at this location before heading a bit further uphill to find a more suitable (i.e., softer) drill target. All evidence suggests that this rock target is one of the hardest yet observed in Gale crater, a property that may be indicative of this entire section of the Vera Rubin Ridge.

Well that’s a bummer, but despite not being able to gather a sample for testing, the fact that the rock is so hard does reveal some tantalizing information. Rock hardness is determined by a number of different factors, and the fact that this particular rock is so incredibly hard suggests that their are some very interesting natural process at work in this particular region of the Red Planet.

To a geologist, variations in rock hardness could indicate several different physical and chemical properties about a rock. It is important for us to further characterize and understand why this rock unit is so much harder than the underlying rocks within the Murray formation. Could this increased hardness be related to changes in water chemistry as the sedimentary rocks were being deposited? Or, could this increased hardness be due to subsequent cementation as iron-rich water was injected into the previously deposited sedimentary rocks?

Those are all questions that NASA just doesn’t have enough data to answer, at least not yet. Determining what mechanisms contributed to the formation of any of the rocks on the surface of Mars is an ongoing process, but for now Curiosity will head elsewhere in the hopes of finding some softer to sink its drill into.