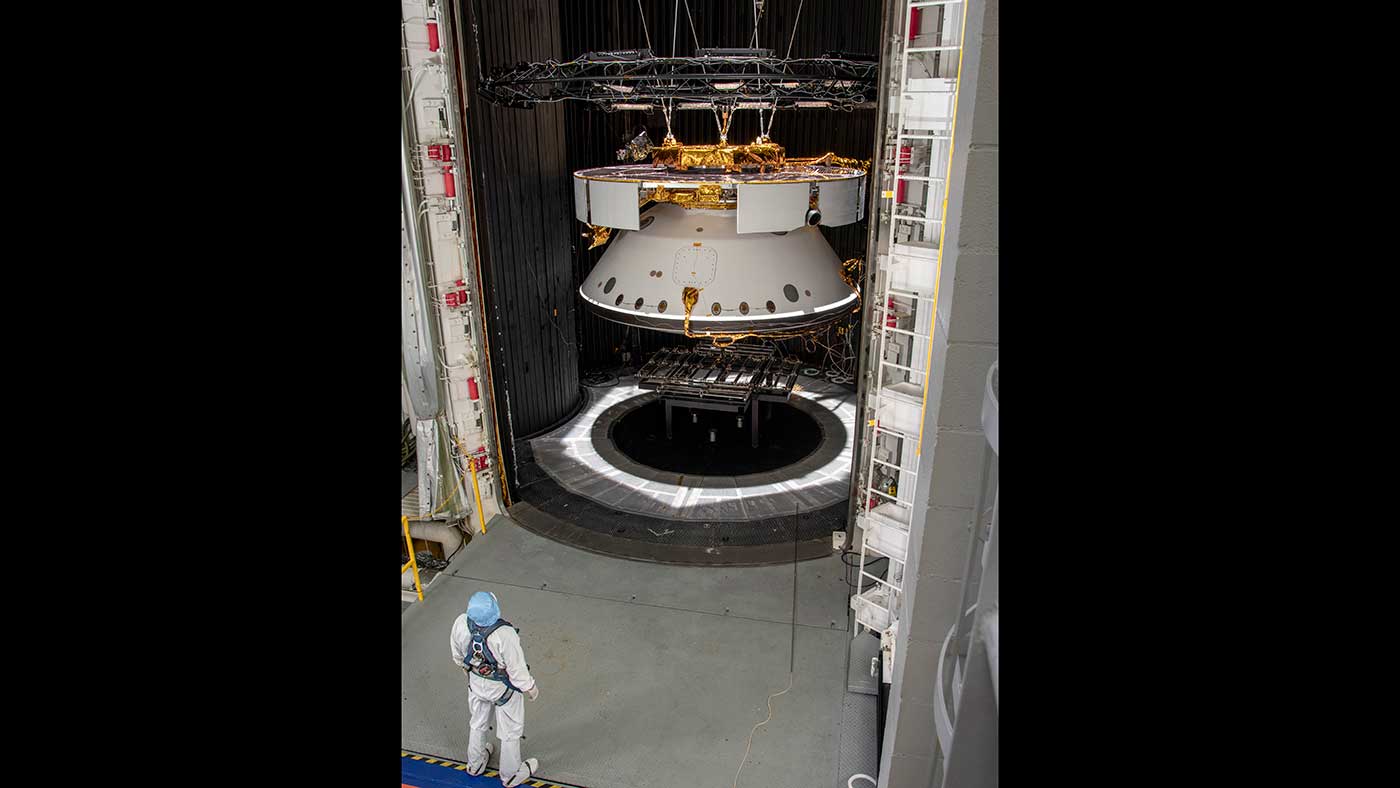 NASA’s Curiosity rover, InSight lander, and Reconnaissance Orbiter are all doing remarkable work on and around the Red Planet, but that’s not stopping scientists from pushing ahead with plans to send yet another piece of high-tech hardware to the Martian surface. The Mars 2020 mission will send another rover to Mars, and with just over a year left before the journey is set to begin, it’s crunch time.

In a new blog post, NASA’s Jet Propulsion Laboratory teases the completion of a very important piece of hardware. The Mars 2020 spacecraft, which will carry the rover during its seven-month-long trip from Earth to its destination, is nearly ready for time in the spotlight, but there’s still some work to be done before a launch date can be solidified.

There’s a lot going on in this image, which was taken at the NASA Jet Propulsion Laboratory’s Space Simulator Facility, but JPL was kind enough to provide a summary:

From the top down, and suspended by cables, is the complete cruise stage, which will power and guide the Mars 2020 spacecraft on its seven-month voyage to the Red Planet. Directly below that is the aeroshell (white back shell and barely visible black heat shield), which will protect the vehicle during cruise as well as during its fiery descent into the Martian atmosphere. Not visible (because it’s cocooned inside the aeroshell) is the completed rocket-powered descent stage and the surrogate rover (a stand-in for the real rover, which is undergoing final assembly in JPL’s High Bay 1 cleanroom).

The Mars 2020 mission will be NASA’s most ambitious Mars mission yet, and the rover itself is packed with instruments and tools that have never been sent to the Red Planet before. One of the most important is its new sample-gathering tools that will collect surface material and eventually deliver those samples to vehicles will fly all the way back to Earth where scientists can study them in greater detail.

At the moment, Mars 2020 has a projected launch date of Summer 2020, and things are shaping up nicely for NASA to nail that window. After leaving Earth, the spacecraft will spend seven months in space before arriving at Mars in February of 2021.