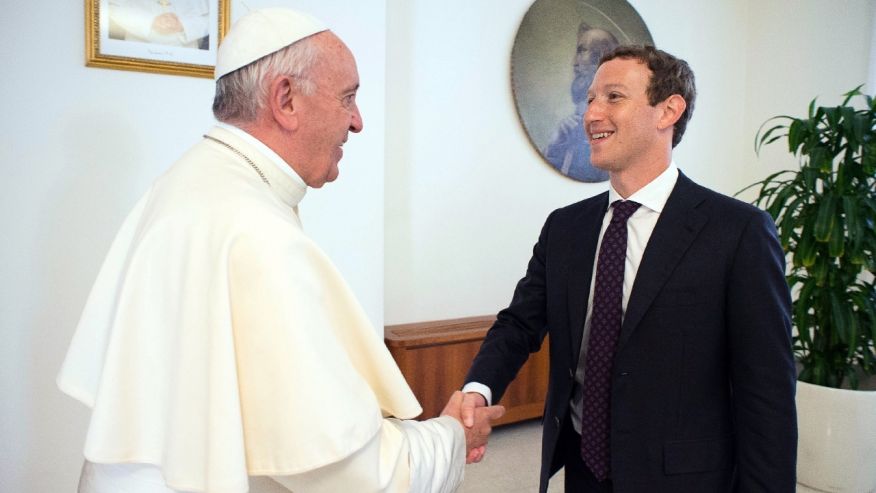 Zuckerberg and his wife Priscilla Chan met Pope Francis in the Santa Marta residence, the guest house in Vatican City where the pope lives.

“We told him how much we admire his message of mercy and tenderness, and how he’s found new ways to communicate with people of every faith around the world,” explained Zuckerberg, in a Facebook post Monday. “We also discussed the importance of connecting people, especially in parts of the world without internet access.”

Zuckerberg gave the Pope a model of Aquila, Facebook’s solar-powered unmanned plane that will extend Internet connectivity to parts of the world that don’t have it. The Facebook CEO and his wife also discussed their charitable Chan Zuckerberg Initiative with Pope Francis.

The Facebook chief wore a dark suit and tie for the meeting, eschewing his trademark look of gray t-shirt and blue jeans.

Zuckerberg is the latest Silicon Valley heavyweight to meet the Pope. In January the Pontiff met with Apple CEO Tim Cook, just a few days after hosting former Google CEO Eric Schmidt. Pope Francis met Instagram CEO Kevin Systrom in February, where they discussed the unifying power of photos. The Pope’s Instagram account was launched the following month and racked up more than a million followers within 12 hours.