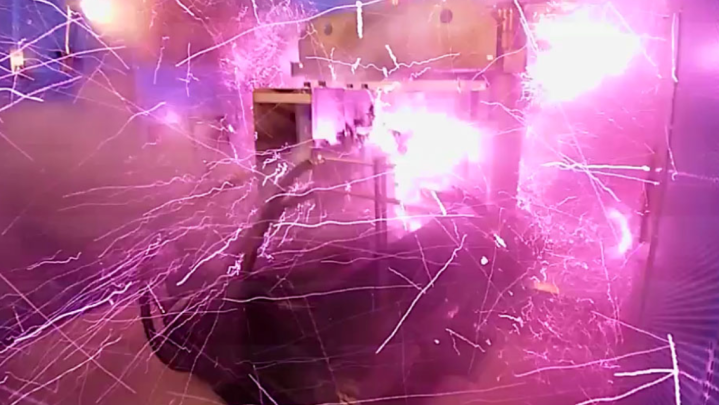 Scientists are always looking to push the limits of their own creations, but most of the time that doesn’t mean utterly destroying some very fancy machines. That’s just what a team of researchers from the University of Tokyo was willing to break the world record for most powerful indoor magnetic field ever generated.

The team, which published their resulted in a study in Review of Scientific Instruments, used a technique known as electromagnetic flux-compression to see how powerful of a magnetic field they could generate with their new hardware. Not only did they break the record by a mile, they actually caused a massive explosion in their own lab in the process. Success!

Electromagnetic flux-compression might sound like something straight out of Back To The Future, but the magnetic field the researchers detected was anything but fiction. The physicists wanted to really max out what their generator was capable of, and were willing to break it to find out, but they got even more than they expected.

Speaking with IEEE Spectrum, lead researcher Shojiro Takeyama explained that his team was hoping to achieve a magnetic field that reached 700 Tesla (the unit of measurement for gauging the strength of a magnetic field). At that level, the generator would likely self destruct, but when pushed to its limits the machine actually achieved a strength of 1,200 Tesla.

This was the result:

To put that in perspective, an MRI machine — which is the most intense indoor magnetic field most people would ever encounter — comes in at just three Tesla. Needless to say, the researchers’ machine didn’t survive the test, but it did land them in the record books.

“Decades of work, dozens of iterations and a long line of researchers who came before me all contributed towards our achievement,” Takeyama said in a statement. “I felt humbled when I was personally congratulated by directors of magnetic field research institutions around the world.”