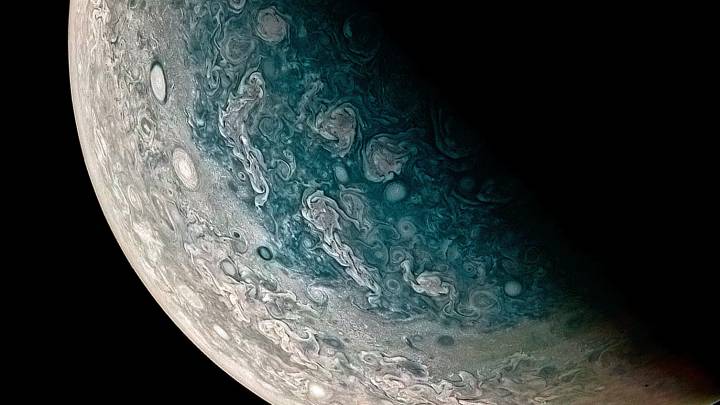 Jupiter is a massive, swirling mass of towering storm clouds, and anyone who lives on Earth knows that storms are fantastic at producing lightning. When NASA sent its Voyager 1 spacecraft on its trip through our Solar System, its flyby of Jupiter revealed that Jupiter does indeed have lightning, but it wasn’t producing the same kinds of radio signals that scientists are familiar with from lightning here on Earth. Now, nearly four decades later, NASA finally knows why.

NASA researchers just published a new paper in Nature that describes how they used data from the Juno probe to solve the mystery of Jupiter’s strange lightning, and it reveals that the planet’s storms produce flashes that are both very similar and also completely different from lightning on Earth.

“No matter what planet you’re on, lightning bolts act like radio transmitters—sending out radio waves when they flash across a sky,” Shannon Brown of NASA’s Jet Propulsion Laboratory, and lead author of the work, explains. “But until Juno, all the lightning signals recorded by spacecraft [Voyagers 1 and 2, Galileo, Cassini] were limited to either visual detections or from the kilohertz range of the radio spectrum, despite a search for signals in the megahertz range. Many theories were offered up to explain it, but no one theory could ever get traction as the answer.”

That’s a lot to digest, so let’s break it down a bit: All the tools on previous spacecraft that tried to listen in to Jupiter’s lightning didn’t hear the kinds of radio signals that are produced by lightning on Earth. Nobody knew why that might be, but in Juno’s flybys of the planet it has managed to hear what previous spacecraft couldn’t.

“In the data from our first eight flybys, Juno’s MWR detected 377 lightning discharges. They were recorded in the megahertz as well as gigahertz range, which is what you can find with terrestrial lightning emissions,” Brown explains. “We think the reason we are the only ones who can see it is because Juno is flying closer to the lighting than ever before, and we are searching at a radio frequency that passes easily through Jupiter’s ionosphere.”

Previous missions might just not have been close enough to hear the signals, or they may have been largely blocked by Jupiter’s own atmosphere. Now, however, Juno can hear the signals the others missed, and that means the lightning on Jupiter is actually a lot like our own… but not exactly the same. In addition to solving the riddle, the researchers discovered that the origin of Jupiter’s lightning is very different from what we’re used to on our own planet.

NASA says the lightning distribution on Jupiter is “inside out” compared to Earth. The lightning originates at Jupiter’s poles, rather than distributed across its surface, and the researchers attribute that to Jupiter’s distance from the Sun. They think that, because Jupiter’s atmosphere is stable near its equator thanks to warmth from the Sun, the lightning is forming in the much less stable air rising near its poles from within the planet. Neat!