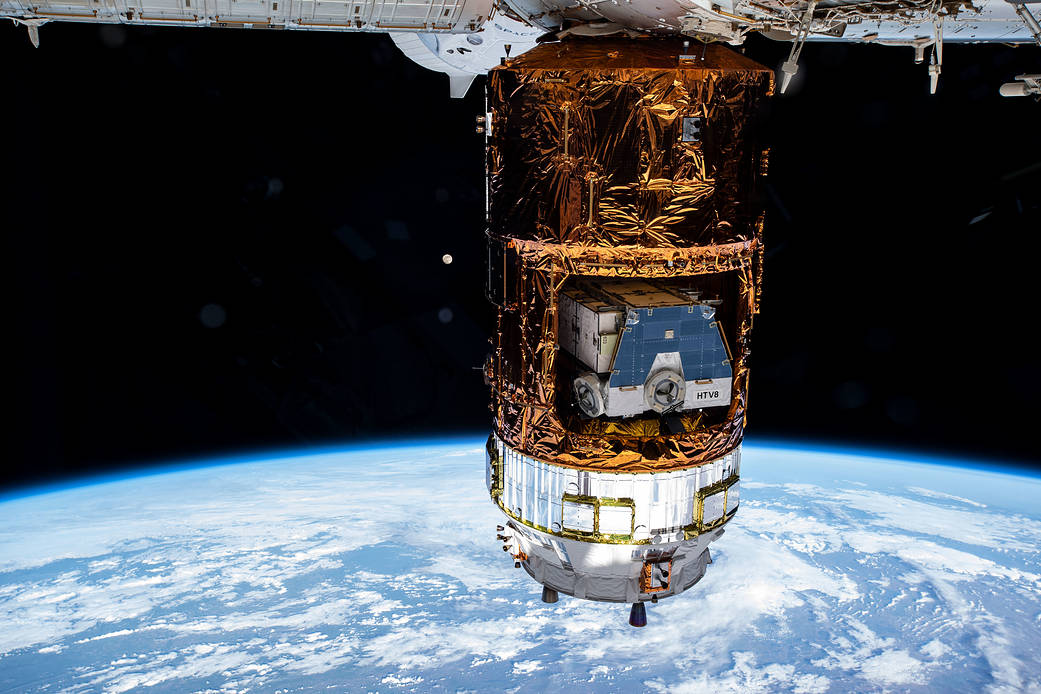 Science fiction films have taught us that futuristic spaceships are sleek and stylish and, well, cool. The reality is somewhat different, at least in terms of design. Most spacecraft in use today are utilitarian in their design. Building something that works and works well is the primary goal, and aesthetics are often a secondary concern. Still, there’s something pretty awesome about seeing a big old cargo ship hanging out 220 miles above Earth.

NASA chose to highlight a particularly gorgeous image recently snapped from the International Space Station. In it, we see a Japanese resupply ship called H-II Transfer Vehicle-9 (or HTV-9 for short) comfortably dangling high above the Earth.

What we see here is the HTV-9 vehicle already loaded with an old supply pallet that was brought up on HTV-8, the previous Japanese cargo mission. “The pallet contains old nickel-hydrogen batteries for disposal that were disconnected from the station during a series of spacewalks at the end of 2019,” NASA explains in its post.

The spacewalks that were conducted to replace the batteries took place over the course of several months. The new batteries have a greater capacity so fewer are needed to hold the power that the space station uses when it falls into the shadow of the Earth. When the station is in full sunlight it is powered by its solar panels, but the batteries are crucial when sunlight isn’t available, which happens countless times every day. There’s still more work to be done, but additional battery replacements won’t be carried out until later in 2020.

HTV-9 brought a wealth of supplies to the ISS when it arrived back on May 20th. Among the cargo was water, experiments, and “six new lithium-ion batteries needed to complete an overall update of the station’s electrical system,” NASA says.

Unlike some cargo vehicles, Japan’s HTV spacecraft have what are known as “exposed pallets.” Carrying these pallets in an unpressurized holding bays doesn’t pose a problem for the cargo and it’s especially useful when the cargo craft is released from the International Space Station.

The H-II Transfer Vehicles are expendable, meaning that they’re not designed for reuse and are built to eventually be destroyed. You can think of them like big space garbage cans. Loaded with items that the ISS crew no longer needs and serves to useful purpose back on Earth, the spacecraft drift into Earth’s atmosphere and are incinerated. Convenient!