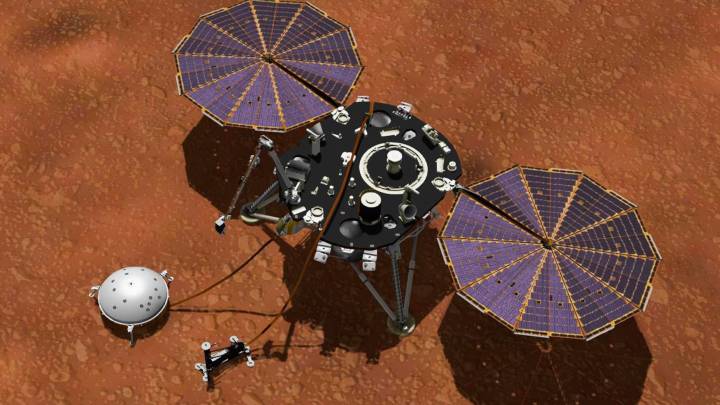 On May 22nd, a stationary robot on Mars used its arm to scoop up some Martian sand. It then slowly dumped it onto itself, with the brisk Mars wind snatching the tiny grains and whipping them against the machine’s solar panels. The robot was NASA’s InSight Mars lander, and the sand dump wasn’t a mistake. It might sound counterintuitive, but the space agency aimed to actually clean one of the lander’s most sensitive components by using the sand as a tool to knock off a layer of rust-colored dust that covers the entire lander.

Unlike NASA’s Curiosity and Perseverance rovers, the InSight lander relies on solar power to gather energy. It stores the power in its batteries so it can enjoy a steady supply of electricity to its vital instruments. Unfortunately, with Mars approaching its farther point from the Sun in its orbit, solar power is waning, and the reddish dust covering the lander and its solar panels is only making things worse.

Mars is often very windy and, as we all know by now, that wind can kick up a whole lot of dust. Massive dust storms regularly cover huge areas of the planet, and sometimes the entire planet, and that dust loves to settle on solar panels. InSight doesn’t have an easy way of cleaning off its solar panels, and dust is just something that past missions to Mars have had to deal with. But with InSight experiencing a pretty dramatic drop in power collection thanks to the combination of the sticky dust and the Sun being farther away than it is for the rest of the year, the robot’s handlers decide to try something.

InSight’s team has been thinking up ways to try to clear dust from its solar panels for almost a year. For example, they tried pulsing the solar panel deployment motors (last used when InSight opened its solar panels after landing) to shake the dust off but didn’t succeed.

After that attempt failed, the team came up with a different technique that, on the surface, sounds pretty silly. The idea was to gather sand and gradually drop it near the solar array but not piling it on top of the panels themselves. The scientists attempted this on May 22nd at noon, when JPL says the wind is at its strongest. The wind grabbed some of the sand grains and bounced them off of the solar panels, knocking a bunch of dust loose which was then carried away in the breeze.

The technique worked incredibly well, and while the solar panels aren’t totally free of dust, the portion that was affected by the sand-dropping strategy produced a bump in energy collection of 30 watt-hours per Martian day. InSight is currently in a two-year mission extension following its initial two-year primary mission. Let’s hope the robot has enough power to keep going for as long as it needs to.