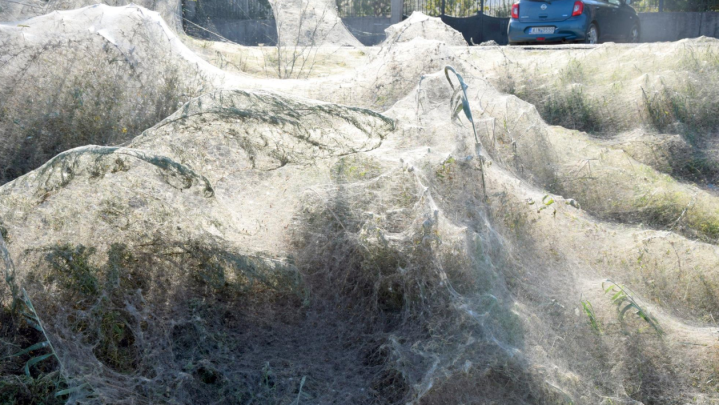 Arachnophobes will want to avoid the Greek town of Aitoliko for a while. That’s because a massive army of eight-legged web weavers has descended upon quaint seaside locale and blanketed trees, road signs, and huge stretches of shoreline in wispy webs.

Like something out of a horror movie, the town’s residents have been forced to put up with their home turning in a massive bug-catching festival. But what’s probably the most surprising thing about all of this is that nobody really seems to mind all that much. In fact, they’re pretty used to it at this point.

As ScienceAlert notes, this isn’t the first time that the town has had to put up with a massive influx of spiders. This kind of thing apparently happens with shocking regularity, with massive spiderwebs popping up in the town every few years. The spiders aren’t dangerous — at least not to humans — and they eat a lot of even more annoying bugs, like mosquitos, so the locals tend to just let them do their thing.

But what actually prompts the spiders to come out in full force? Nice weather, of course! A surplus of tasty insects and warm temperatures have made for perfect breeding conditions, and the spiders have taken advantage in a big way.

“The spiders are taking advantage of these conditions and are having a kind of a party,” Maria Chatzaki, a biologist with Democritus University of Thrace, told Greece news outlet Newsit. “They mate, they reproduce and provide a whole new generation.”

The spiders won’t last long, and while their webs may be a bit of a nuisance for now they’ll eventually break down and the affected areas will return to normal. That is, until the next pleasant stretch of weather creates another spider frenzy.