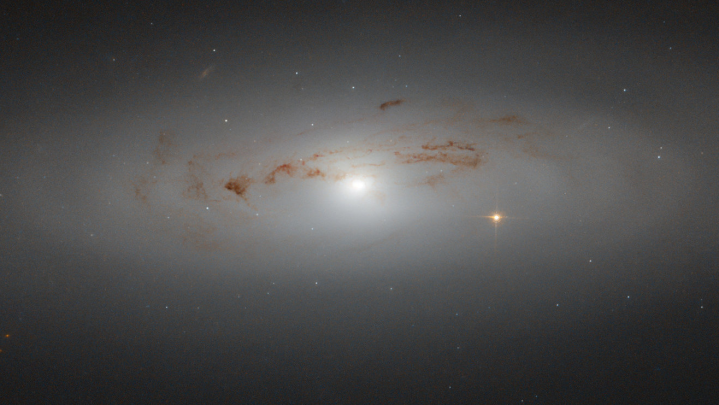 NASA might still be waiting for its next-generation planet spotting telescope to get off the ground, but the aging Hubble is still doing a fine job in the meantime. The telescope, which was originally launched way back in 1990, has spent the last 28 years delivering some truly breathtaking images from space, and one of its latest photos is yet another entry into its long list of achievements.

The image you see above is a galaxy known as NGC 4036. At around 70 million light-years away, it would be a bit of a trip to actually make it there, but Hubble is capable of delivering a pretty fantastic glimpse at it from Earth orbit.

The most striking thing about the galaxy, as you can clearly see from this image, is the seemingly random organization of dust that punctuate the otherwise bright haze. That dust is considered a signature feature of NGC 4036, and while astronomers can only venture a guess as to why it looks like it does, it’s still certainly interesting.

This galaxy is known for its irregular lanes of dust, which form a swirling spiral pattern around the center of the galaxy. This core is surrounded by an extended, hazy aura of gas and dust that stretches farther out into space and causes the warm, fuzzy glow that can be seen here. The center itself is also intriguing; it is something known as a LINER-type (Low-Ionization Nuclear Emission-line Region) galactic nucleus, meaning that it displays particular emission lines within its spectrum.

The other eye-catching part of the image is the particularly bright star located to the lower right of the center of the galaxy. That star isn’t actually part of the galaxy, and is kind of just photobombing Hubble’s view of the distant system. The star is located between Earth and NGC 4036, and has just sort of gotten in the way.

With 70 million light-years between us, there’s really no telling what the galaxy might actually look like today. From out perspective, we’re seeing what the galaxy looked like a long, long time ago, but things are likely quite different there today.