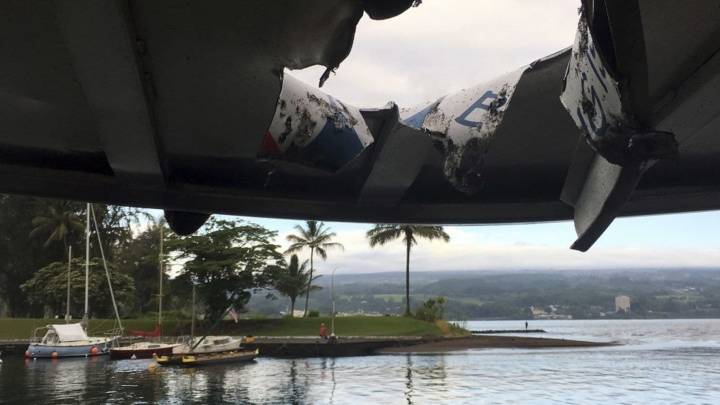 Hawaii’s Kilauea volcano has been erupting since May, but despite the awe-inspiring magnitude of the lava flows, injuries have been remarkably few thanks to the work of Hawaii’s authorities. The biggest danger has been tourists trying to get too close for that ultimate selfie moment  — something that has led to criminal charges of dozens — and now something far more tragic has happened.

According to the Washington Post, 23 people on board a sightseeing boat were injured on Monday morning when a basketball-sized “lava bomb” came through the roof of the vessel and peppered the passengers with shrapnel. Four passengers were taken to the hospital, including one woman with a broken leg.

According to Reuters, the boat’s captain said he made several passes 500 yards from the shore, where lava was entering the ocean. He didn’t see any major explosions, so navigated his boat to within 250 yards. As they were exiting the zone, a “huge” explosion was seen, and a basketball-sized chunk of lava made a hole in the top of the boat.

The incident is being investigated by agencies including the Hawaii police and US Coast Guard, according to Hawaii News Now.

“It’s premature at this point to discuss what violations might be found out of this. The investigation is going to find out whether there were any violations of federal or state law,” Jason Redulla of the DLNR Division of Conservation and Resources Enforcement told HNN.

The US Coast Guard has a general exclusion zone of 300 meters around any lava entry into the ocean, although Reuters reports that tour operators can apply for a permit to get within 50 meters. It’s unclear whether the tour boat in question had such a permit.

Officials have warned about the dangerous situations that can be created when lava interacts with ocean water, which can create “laze,” a hazardous mix of hydrochloric acid, tiny glass particles, and steam.