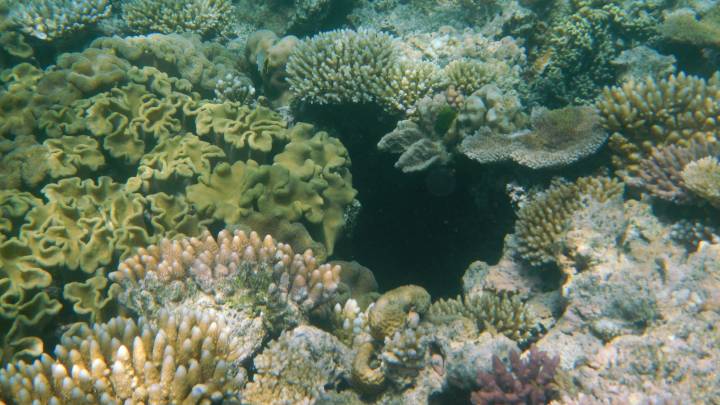 Australia’s Great Barrier Reef has seen better days. It’s suffering from advanced bleaching as a result of climate change and rising ocean temperatures, and scientists are saying that there’s a good chance much of it is destroyed for good. Now, new research suggests that mass die-off of coral is causing another incredibly dire side-effect: silence.

You probably don’t think of the ocean as a very noisy place, but fish and other creatures do tend to cause a ruckus when they’re grouped up together. Healthy coral reefs and the many creatures that either live, hunt, or hide there, do make a fair bit of noise, and that noise acts like an acoustic beacon for baby fish searching for shelter. When coral dies off like it has in many sections of the reef, those creatures leave the area, and baby fish don’t know what direction to head in search of food and shelter.

The research, which was conducted by the Australian Institute of Marine Science and published in the Proceedings of the National Academy of Sciences, focused on areas of damaged reef around Lizard Island near the norther end of the Great Barrier Reef. The scientists used underwater acoustic sensors to measure the noise of the “coral reef orchestra,” as they call it. The various fish and crustaceans that normally inhabit the area are now present in dramatically reduced numbers, leading to a significant decrease in the noise levels, and this has resulted in a 40% drop in baby fish arrivals.

“Reef fish disperse their young away from reefs in open water to help the larvae survive, and once they develop into juveniles, they have to find their way back to a reef,” Dr Mark Meekan, one of the study’s authors, explains.“It is a fairly complex story and people are surprised to hear reefs are very noisy places. If juvenile fish aren’t hearing their way home anymore, that could be bad news for the recovery prospects of reefs.”

The researchers are now considering how using artificial sound via underwater loudspeakers might benefit reefs in recovering lost fish, and propping up the ecosystem while the reefs have a chance to recover. Australia just pledges AU$500 million to reef recovery efforts, and scientists seem to have their work cut out for them.