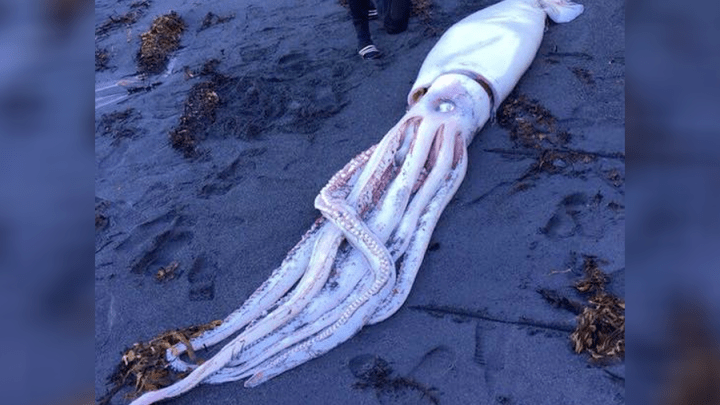 Sailors used to share tales of “sea monsters” with massive tentacles that could drag an entire ship and its crew down to the ocean depths. These stories were long thought to be nothing more than fever dreams of rum-soaked sea farers, but in the past few decades scientists have discovered evidence that they might have been at least partially based in fact. Now, an example of a true sea monster has washed up on the shores of New Zealand, and it’s an incredible sight.

The creature is a giant squid, and it was discovered by a trio of brothers who accidentally stumbled across it while heading out for a morning swim. The squid, which was found on a particularly remote section of beachfront, has since been collected by scientists.

Giant squids live far below the ocean surface. Some of the first specimens of the species came thanks to fishermen who would accidentally snag them in their nets, but those remains were usually mangled. Every once in a while a body of a squid will appear on a beach, like this one in New Zealand, but a specimen in as good of condition as this one is pretty rare.

Because giant squid are reclusive by nature, spotting a live one is incredibly hard to do. It wasn’t until a research mission in 2004 that a live giant squid was even captured on video, much less studied in its natural habitat. Giant squid are known to top 40 feet in length, but their size is actually dwarfed by an even larger species, commonly known as the colossal squid. Colossal squid have been measured at up to 46 feet, but because so few examples exist it’s hard for scientists to estimate a maximum size.

Human divers are incredibly unlikely to encounter a giant squid in the water, due to the fact that the squid live far deeper than a human diver could ever safely reach. That’s probably for the best, since a creature of this size could easily manhandle a human if it were to mistake it as possible prey.