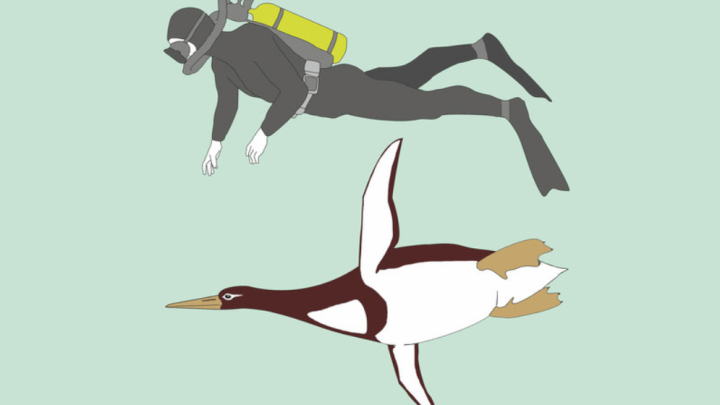 Today’s penguins might be cute, charming little flightless birds that draw your eye at your local zoo, but things were a whole lot different some 59 million years ago. Researchers working in New Zealand revealed today the discovery of an absolutely massive ancient penguin that would have given an adult human a real fright if the two were ever to have crossed paths.

The long-dead creature has been named Kumimanu biceae, which means “monster bird,” and it most certainly lives up to that moniker. The giant penguin is thought to have stood around 5 feet 10 inches tall, which would have allowed it to stare many humans right in the eye, and it weighed a whopping 220 pounds when grown. Let’s just say you wouldn’t want to be competing against it for a fish.

A paper on the discovery, which was published in Nature Communications, describe the newly-found fossils as the largest of any known penguin species. In fact, even the mighty Emperor penguin, which is the largest penguin walking the Earth today, only tops out at around 4 feet tall and a measly 88 pounds, and would have been rather puny when standing alongside the ancient beast.

The ancient bird would likely have hunted much as modern day penguins do, by diving under the ocean waves in search of fish and other tasty treats. However, unlike the frosty landscape where many penguins dwell today, these birds preferred a subtropical climate.

The researchers attribute the supersized bird’s stature to the time in which it lived, which is thought to have been between 55 and 60 million years ago. At that point, dinosaurs were freshly wiped off the face of the Earth, shaking up the food chain in a major way. Creatures which were scraping the bottom of the survival barrel found a new lease on life and some, like this massive penguin, were able to thrive in ways they previously couldn’t.

With the emergence of whales still several millions of years away, the giant penguins would have had plenty of prey and very few predators. It is theorized that other marine mammals would eventually give the penguins a run for their money, and push the giant species to extinction, while the smaller varieties managed to hang on.