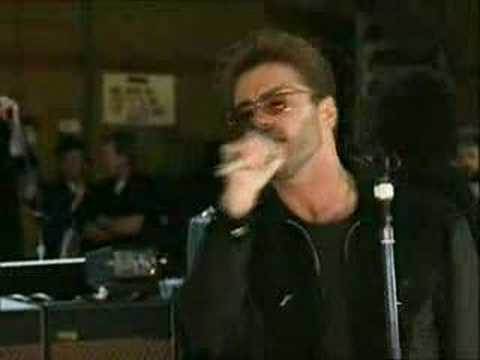 Five days left of 2016, and the bad news just keeps coming. The internet is mourning the passing of George Michael today, but he’s not exactly the only notable musical talent to have left us this year.

One of the better videos going around Twitter today is this behind-the-scene footage of George Michael rehearsing a cover of Queen’s Somebody to Love, in preparation for a Freddie Mercury tribute concert. If you look carefully in the background, you’ll also catch a look at David Bowie.

It’s not easy to cover Freddie Mercury, but Michael nailed it in the rehearsal, and he pulled it off just as well in the actual concert.

The concert was held in the old Wembley stadium in London, in the name of AIDS awareness. It reportedly reached an audience of a billion people around the world, and included performances from Michael, Bowie, Elton John, Roger Daltrey of The Who, Axl Rose and Slash, among others.

The Michael covers of Queen were turned into an EP that sat on top of the British best-seller chart for weeks.