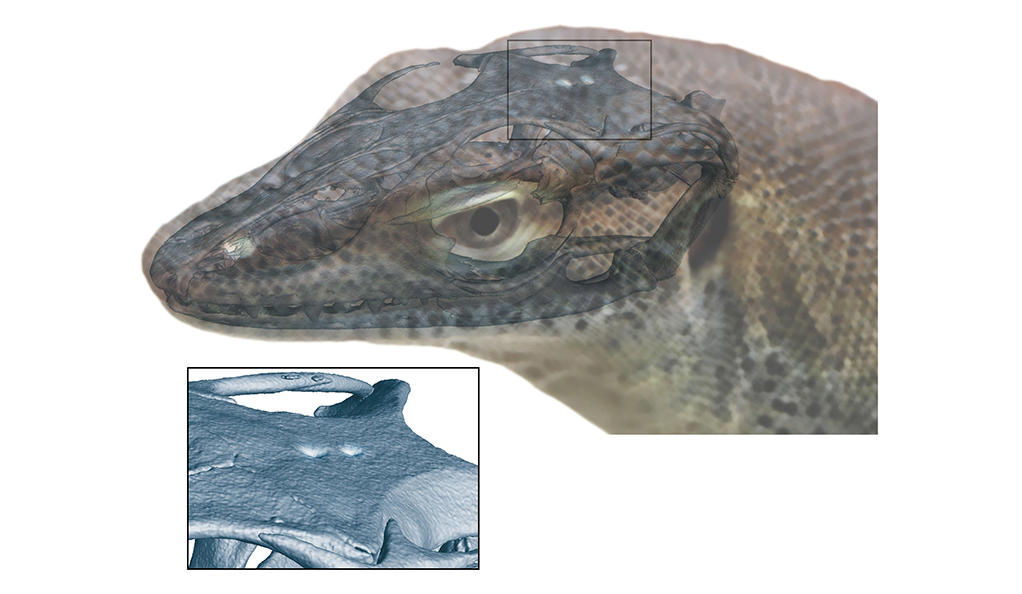 An ancient lizard that lived nearly 50 million years ago boasted a total of  four eyes, according to a new report from scientists at Yale. The study, which was published in the journal Current Biology, describes how the four-eyed creature called Saniwa ensidens had both a traditional pair of peepers as well as two additional eyes located on the top of its head.

What’s even more remarkable about the discovery is that it wasn’t made from a new fossil, but rather a collection of fossil fragments that were originally discovered in the 1870s. Using CT scanning, the scientists discovered the extra eyes, and learned a great deal about how they formed.

The eyes weren’t the kind that you’re probably imagining. No, the lizard didn’t look like a spider, with a group of four eyes clustered around its head. The third and fourth eyes in this case were tiny nodes situated on the top of the lizard’s head, and were likely used to detect changes in light, among other things. Third eyes in various vertebrates are well known, but this is the first case in which a fourth such eye has been discovered.

“By discovering a four-eyed lizard, in which both the pineal and parapineal organs formed an eye on the top of the head, we could show that the lizard third eye really is different from the third eye of other vertebrates,” lead author Krister Smith explains. “They can sense light and play a role in the endocrine system. However, some of the abilities conferred by the pineal are really quite extraordinary. For instance, some lower vertebrates can sense the polarization of light with the third eye and use this to orient themselves geographically.”

The discovery is important for a number of reasons, not least of which is the ongoing study of how eyesight evolved in vertebrates. The timing of the development of third eyes in lizards is still somewhat hazy, and evolutionary biologists now have to figure out where a four-eyed lizard fits into the grand scheme of things.