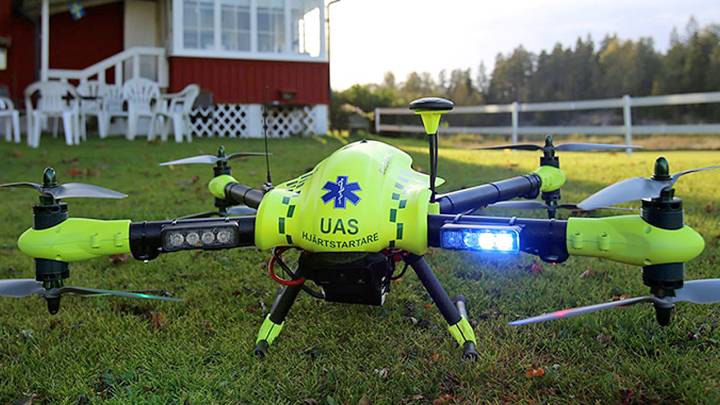 At the moment, drones are in a weird place. They’re popular among hobbyists and photographers for the eye candy they can capture, but they’re also extremely useful for more important duties, like search-and-rescue efforts, package deliveries, and even transporting medical samples. Now, a Swedish startup called FlyPulse is poised to launch emergency response drones that could quite literally save your life.

The FlyPulse LifeDrone-AED is a quadcopter that carries an automated external defibrillator. It’s designed to be dispatched to a location where a victim of cardiac arrest has been reported, beating traditional emergency services in pure speed and cutting the response time by several minutes.

“Every year 10000 people in Sweden experience cardiac arrest outside of hospital,” FlyPulse explains on its website. “About 500 of these survive. The single most important factor for achieving higher survival is to reduce the time between the cardiac arrest and defibrillation of the patient.”

The LifeDrone has a range of nearly ten miles, which is pretty impressive considering its life-saving payload. It works with an alarm system and software, also developed by FlyPulse, and can be installed just about anywhere.

In terms of just how beneficial such a drone system could be if installed in an area, a recent study published in the Journal of the American Medical Association revealed that the LifeDrone was able to respond to a location within its range an average of four times faster than an ambulance. When seconds can be the difference between a heart attack survivor and a tragic statistic, that’s a huge plus.