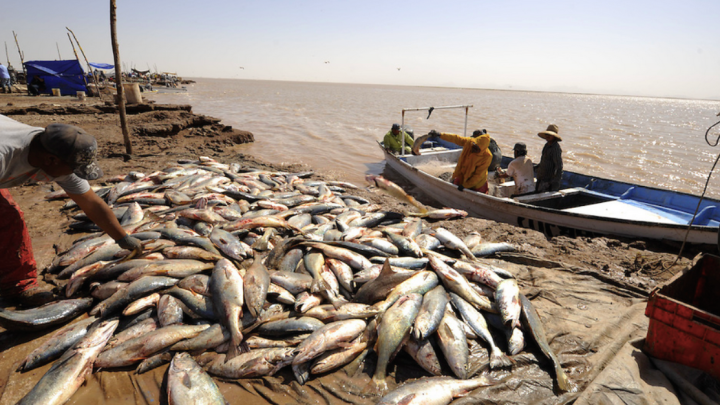 Anyone who has ever lived in an apartment complex with paper-thin walls knows that being forced to listen to your neighbors rock each other’s world can be a seriously awkward way to spend an evening. As it turns out, humans aren’t the only creatures that find themselves in this troubling predicament, as new research into the spawning habits of a certain fish species reveals that their raucous coitus is so loud it could permanently deafen nearby animals.

The study, which was conducted by researchers from the University of Texas and the University of San Diego, focused on the reproductive routines of the Gulf corvina, a fish species that heads to the Colorado River Delta in the Gulf of California every year to spawn. The adult fish that make the journey, of which there are millions, have a particularly obnoxious mating call that, when multiplied, can be downright hostile to the ears.

The mating calls of the fish apparently sound like the firing of a “really loud machine gun.” The sound generated by a single fish is noticeable, but when combined with a million or more of its brethren it may be enough to actually damage the hearing of marine mammal species.

“The sound levels generated by chorusing is loud enough to cause at least temporary if not permanent hearing loss in marine mammals that were observed preying on the fish,” Timothy Rowell, co-author of the study, explains.

But while natural predators might have a hard time dealing with the noise while feeding, it’s humans who pose the greatest risk to the mating fish. The researchers, who are hoping to preserve the fish, argue that fishermen should be limited in their harvesting of the corvinas. At present, hundreds of boats use the annual spawning event to net millions of the fish just as they are trying to reproduce, and the wild fish are already getting smaller year-over-year, suggesting that they are being overfished to a significant degree.

“These spawning events are among the loudest wildlife events found on planet Earth,” Rowell says. “A precautionary approach should be adopted by fisheries managers to ensure that this wildlife spectacle does not disappear.”