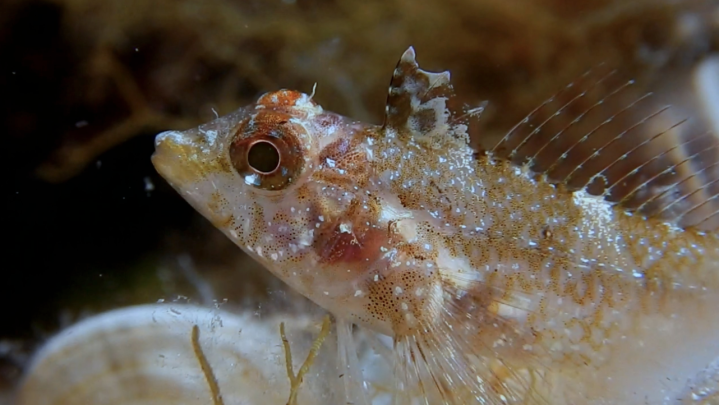 Life in the deep reaches of the oceans often takes on unusual forms to suit its surroundings. Some species of fish evolve into strange shapes and invent entirely novel methods of hunting prey in the dark. A new research effort has revealed that one particular species, called the triplefin, is capable of redirecting light with its eyes and is even able to change the hue of the light to suit its specific hunting needs.

The research, which was published in Royal Society Open Science, explains how the fish has developed what they call “ocular sparks” that capture the scant incoming light and reflect it outward for the purpose of stalking prey. The fish appears to have full control over the reflective regions of its iris and can adjust the color of the reflected light between blue and red in rapid fashion in order to better see its victim.

“The triplefin Tripterygion delaisi can alternate between red and blue ocular sparks, allowing us to test the prediction that spark frequency and hue depend on background hue and prey presence,” the researchers write. “In a first experiment, we found that blue ocular sparks were significantly more often ‘on’ against red backgrounds, and red ocular sparks against blue backgrounds, particularly when copepods were present.”

A second experiment sought to determine whether fish which hadn’t eaten recently were more likely to use their fancy photolocation abilities, but that turns out not to be the case. Still, it was abundantly clear that the color of the surroundings was a huge factor in which hue of ocular spark was used, cementing the theory that the fish is in complete control over its tiny “flashlight” eyes.

Many deep sea creatures utilize light in interesting ways. Some are capable of bioluminescence, meaning that they generate their own light either to lure in prey or to help locate and orient themselves while hunting. The triplefin’s eyes don’t generate their own light, instead relying on whatever light managed to filter down to the depths where the fish dwells. However, the triplefin is the first fish species that has demonstrated the ability to alter the hue of its reflected light at will, making it a very special creature.