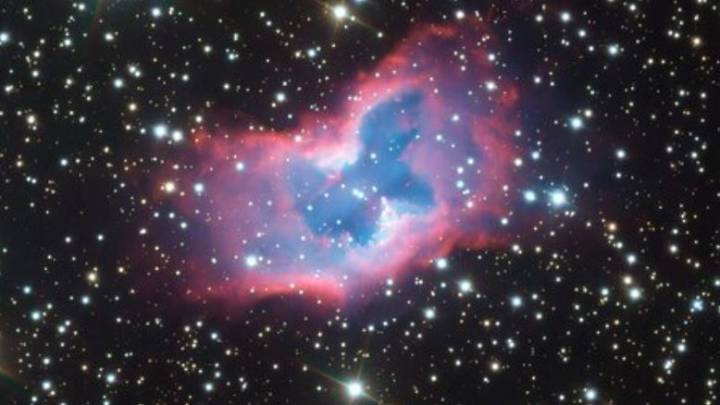 Celestial objects come in all shapes and sizes, and most are a real treat to look at. Still, some are more breathtaking than others, and the massive blob of gas known to astronomers at NGC 2899 is in a class of its very own. The massive bubble is in the shape of a butterfly with its wings spread, and scientists as the European Southern Observatory just snapped the most detailed image of it to date.

The European Southern Observatory (ESO for short) says the object is somewhere between 3,000 and 6,500 light-years from Earth. A pair of stars sits near its center, and as one of them died it blasted surrounding gasses into space. The other star acted upon the gas as it was pushed away, and the result is a nearly symmetrical shape.

Massive collections of gas and dust like this are often the beginnings of a new system. As gravity acts upon the material it coalesces into shapes we eventually identify as planets. It takes a long, long time for this process to unfold, but for now, we’re treated to a nebula that is pure eye candy.

“NGC 2899’s vast swathes of gas extend up to a maximum of two light-years from its center, glowing brightly in front of the stars of the Milky Way as the gas reaches temperatures upwards of ten thousand degrees,” ESO explains. “The high temperatures are due to the large amount of radiation from the nebula’s parent star, which causes the hydrogen gas in the nebula to glow in a reddish halo around the oxygen gas, in blue.”

Along with the stunning image, the European Southern Observatory also created a stunning video showing where the nebula is located in the night sky. It starts from a wide sky field and zooms all the way in on NGC 2899, which is so tiny at first that it’s impossible to find amidst the mass of bright stars. Just take a look:

Pretty wild stuff, huh? If that doesn’t make you feel tiny and insignificant, I don’t know what will.

Understanding the different stages of star and planet formation is important for astronomers that want to paint a clearer picture of the formative years of our own system. Will NGC 2899 eventually become a planetary system with gas giant planets? Will they have a chance to form before the still-active star at its center blows its top and blasts even more loose gas and debris into space? We won’t be around to find out, but it’s fun to think about.