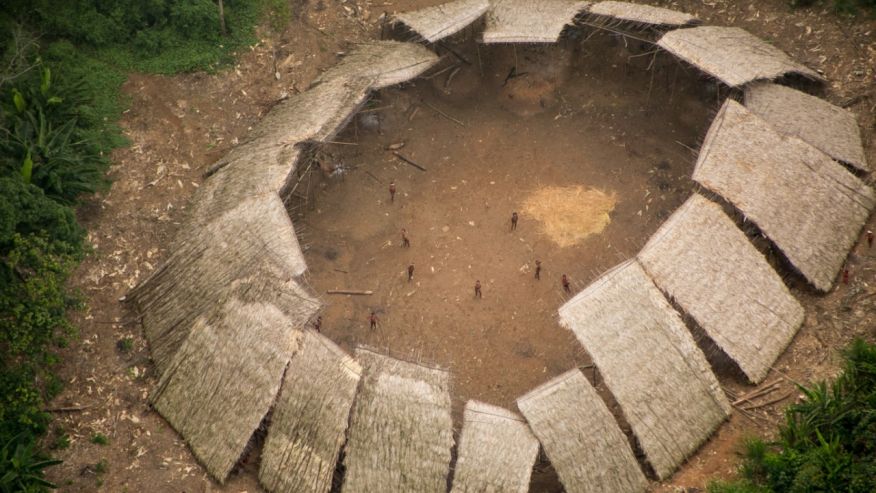 FUNAI, the Brazilian government’s Indian Affairs department, told FoxNews.com that it harnesses satellite and aircraft to check on tribes in the remote area.

Last month incredible new aerial images were released by an indigenous peoples’ advocacy group showing an uncontacted tribe that experts warn could be in danger of being wiped out.

The photos revealed a village in northern Brazil’s remote Yanomami indigenous territory that is estimated to be home to around 100 people.

A typical Yanomami ‘yano’—a large communal house for several families—can be seen in the images. Each of the yano’s square sections is home to a different family, where they hang their hammocks, maintain fires and keep food stores, according to tribal advocacy group Survival International.

The Yanomami have vast botanical knowledge and use about 500 plants for food, medicine and building houses, Survival International said. Tribespeople provide for themselves by hunting, gathering and fishing, as well as cultivating crops such as manioc (cassava or yuca) and bananas, which are grown in large gardens cleared from the forest.

The village is in northern Brazil, close to the Venezuelan border.

FUNAI told FoxNews.com that there have been 103 reports of isolated groups in Brazil, but only 26 have been confirmed. “The actions of locating isolated groups carried out by FUNAI have revealed that this number may increase even more in the coming years,” the spokeswoman explained. “Historical records show that the decision to live in isolation of these peoples can be the result of encounters with negative effects on their societies, such as infections, diseases, epidemics and death, acts of physical violence, the spoliation of their natural resources or events that make their territories vulnerable.”

The department said that it complies with the Moxihatetea’s desire to avoid contact with modern society. “It is possible, however, that they have sporadic and non-permanent contacts with other Yanomami groups,” the FUNAI spokeswoman added.

Survival International warns that the area where the Moxihatetea live is in danger of being over-run by 5,000 illegal gold miners, raising serious fears that they could be wiped out. In a statement released last month, Survival International added that the Brazilian government agents charged with protecting the Yanomami territory are facing severe budget cuts.

The FUNAI spokeswoman told FoxNews.com that “adequate efforts” are being made to support tribes in areas such as the Yanomami indigenous territory.

“FUNAI will continue working to take the necessary measures to protect these isolated groups, seeking to ensure the full exercise of their freedom and their traditional activities,” the spokeswoman said.