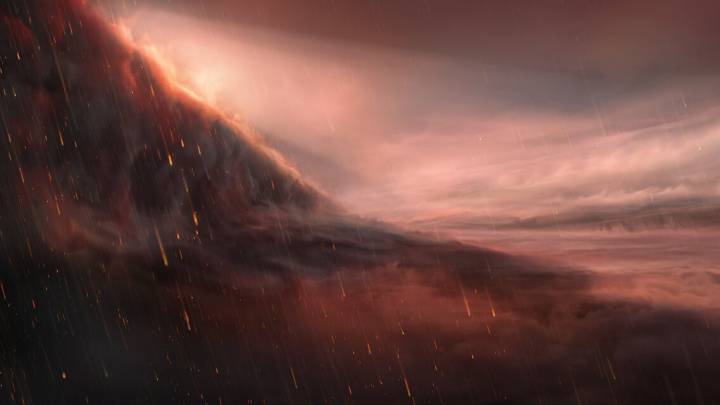 Scientists have spotted a new exoplanet with a particularly extreme form of weather. The planet is believed to have frequent rains, but the material falling from the skies isn’t water… it’s liquid iron. The planet is known as WASP-76b, and it’s totally wild.

The mechanism by which this iron rain occurs is made possible due to the planet’s incredibly hot temperatures. On the day side, researchers believe the temperatures can climb to a whopping 2,400 degrees Celsius, while the night side is significantly cooler.

The wildly hot temperatures on the day side can vaporize metals, but when those gasses are carried by wind to the dark side the slight cooling causes the iron to form liquid droplets which then rain down from above. Despite being cooler on the night side of the planet, temperatures are still scorching, and hover at around 1,500 degrees Celsius, meaning that the liquid metal falling from the sky would be mighty uncomfortable.

“One could say that this planet gets rainy in the evening, except it rains iron,” David Ehrenreich, lead author of the study, said in a statement. Ehrenreich and his team were able to make this determination based on observations of the transition area between the night and say sides of the planet.

When the evening transition happens, iron vapor is detectable in the planet’s atmosphere. “Surprisingly, however, we do not see the iron vapor in the morning,” Ehrenreich notes. The only feasible explanation is that the iron in the atmosphere is condensing and falling back down to the surface in the form of rain.

“Atomic iron is not absorbing starlight [when morning comes]. Iron must thus condense during its journey across the nightside,” the researchers write in a new paper published in Nature.

WASP-76b is situated around 640 light-years from Earth, so there’s no way we’d be able to visit it with current technology. However, the power of the European Southern Observatory’s Very Large Telescope (VLT) makes it possible to detect this wonder of nature from afar.

As scientists continue to peer deep into space in search of never-before-seen planets orbiting distant stars, it’s tempting to imagine that a life-supporting world is just waiting for us to find it. While it’s true that a number of potentially habitable planets have been spotted in recent years, more often than not we are learning that the cosmos is packed with worlds like WASP-76b — incredible planets that are fun to think about but we wouldn’t want to visit.