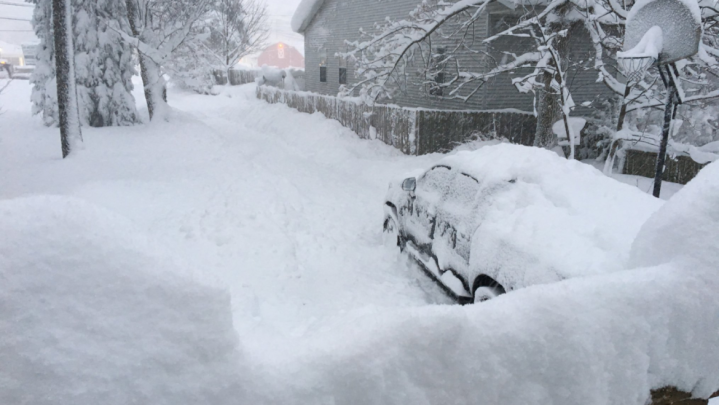 Hey, so, remember earlier this week when the city of Erie, Pennsylvania, got completely slammed with the worst winter storm of the season thus far? By Tuesday the area was blanketed under an absolutely insane 53 inches of snow which dropped in just 30 hours. Well, Mother Nature obviously wasn’t done because the city continued to get snowfall in the days that followed, eventually reaching an overall total of just over 65 inches for the week. Woah.

Meteorologists now say that the Erie has clear skies ahead, with no significant accumulations expected in the immediate future, but that doesn’t make the job of clearing the incredible mess any easier.

I live just 10 mins outside of #Erie and this sign has never been more relevant and appropriate. 34 inches of snow inside 24 hours on Christmas Day and it’s not stop and more on the way this weekend. pic.twitter.com/SMGG7hiGlu

As you might expect, the weather has put life on Erie on hold for many of its residents. Mail service was halted for two full days — it’s expected to resume today — but even if mail carriers head out on their routes, actually delivering to buried mailboxes and front porches is proving troublesome. The city is asking residents to attempt to clear a path to their mailboxes if possible. Residents who need help shoveling are encouraged to contact the local United Way for assistance, and Erie police are asking people to avoid using 9-1-1 for snow removal requests.

So this is what my grandma woke up to after completely cleaning off her truck last night #Erie pic.twitter.com/xHHdZ1ky8c

For most of the week just about everything that could be postponed has been cancelled. Cars buried under feet of snow line the streets, making plowing difficult, and local law enforcement is attempting to get residents to move their vehicles so that clearing the roadways is possible. The city says that plow operators “have been running continuous 12-hour shifts all week,” but there’s still an incredible amount of work to be done before life returns to normal.

The damage the snow has caused around the city is difficult to assess because there’s just so much of it. The huge amount of snow actually managed to collapse an inflatable dome at a sports complex in the city, prompting the owners to scramble for a fix.