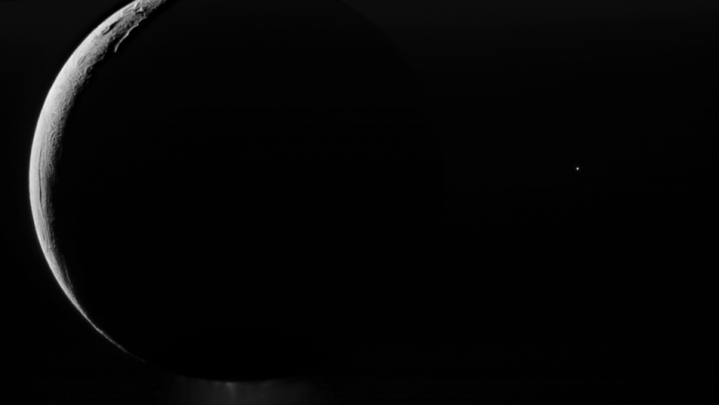 Saturn is an incredibly interesting planet for a number of reasons, not least of which is its iconic rings, but one of its many moons might actually be more worthy of attention than the planet itself. Enceladus, a frosty body measuring a measly 160 miles in radius, has captured the attention of astronomers due to its peculiar behavior, and NASA just released a stunning photo showcasing the far-off moon’s most exciting feature.

The image, which was captured by NASA’s Cassini spacecraft prior to its fateful descent into Saturn’s atmosphere, shows Enceladus bathed in light from the sun. It’s a gorgeous photo, especially with Saturn’s flashy rings acting as a backdrop, but it’s the hazy mist just below the moon that deserves your attention more than anything else.

That blurry glow is light being caught by powerful geysers of liquid water which the moon spews out of its southern pole. The water, which freezes upon being spat out, is proof that the moon holds liquid water beneath its frozen shell, and scientists are growing increasingly interested in the possibility that life might actually exist closer to the moon’s core. Recent studies have suggested that tidal movements generated by Saturn’s gravitational pull may be enough to keep the interior of the moon warm, and water plus heat is often thought to be a big precursor to life as we know it.

NASA has suggested that future missions to visit the moon might offer a better idea of what it has to offer, though no plans have been decided upon just yet. That left the door open for a Russian billionaire to announce his plans to beat NASA to the punch, sending a mission to sample the material being shot out of the moon’s massive ice cracks, though it’s still unclear whether that plan will come to fruition.

The photo was snapped by Cassini at a distance of 90,000 miles, and was captured way back in late November of 2011. Cassini only just completed the final act in its extended mission earlier this year, which gives you an idea of just how much work the probe did during its incredible run.