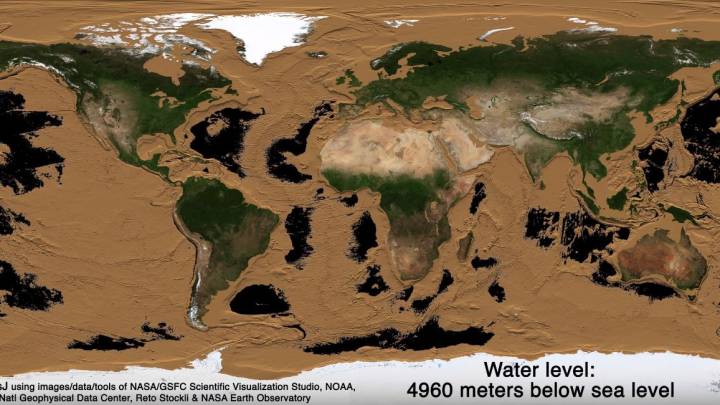 Earth is covered in water. It’s the big blue marble, and oceans dominate its surface… but what if they didn’t? What if Earth’s oceans were 100, 1,000, or even 10,000 meters lower than they are today? Thanks to a handy NASA animation, we know exactly what our planet would look like under those various circumstances.

As ScienceAlert notes, the animation was actually released way back in 2008 by NASA, but it’s recently received a high-definition upgrade thanks to scientist James O’Donoghue, formerly of NASA but now with Japan’s JAXA space agency.

The original video from NASA had a resolution of just 1024×512, but thanks to O’Donoghue’s handiwork, we can now enjoy it in glorious 4K. Behold:

The video is very straightforward. As the water level on the bottom right drops, the results are shown in realtime on the world map. At first, a few hundred meters of sea level loss doesn’t look like much, but it’s not long before huge ridges reveal themselves between continents.

Not long after, the oceans become a huge collection of lakes of varying sizes. Eventually, once the water level dips past 9,000 meters below sea level, there’s basically nothing left, and the planet is essentially naked. It’s a pretty cool little animation, and it’s certainly interesting to see what lies beneath the world’s oceans, though at the moment mankind has an altogether different problem.

Thanks to climate change, sea levels aren’t actually falling but rising. As glaciers and sea ice continue to melt at a more rapid rate, sea levels will begin to rise at different rates around the world. This will put coastal communities in a tough spot, as even a modest increase in sea level could spell doom for many coastal towns.

So, even as you enjoy the video, remember that losing Earth’s oceans is currently the least of our worries. For now, we should be far more concerned with the oceans getting deeper thanks to us.