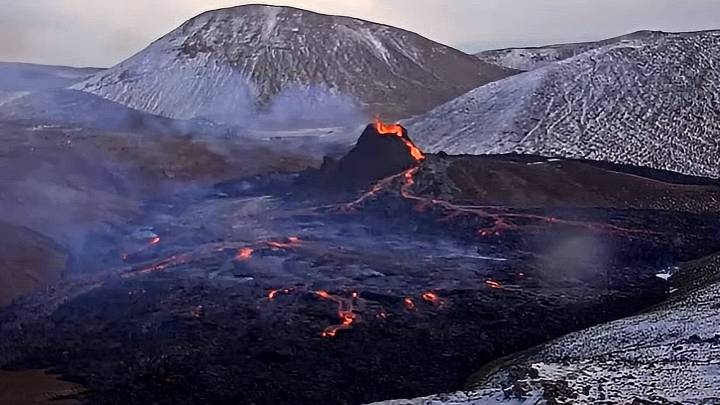 Drone technology has advanced by leaps and bounds over the past decade. As the price of high-tech drones continues to trend downward, more and more people have the opportunity to use their autonomous aircraft to get a birds-eye view of whatever they want. For Joey Helms, a YouTuber that has gained fame thanks to incredible drone videos, Iceland’s Fagradalsfjall volcano provided an incredible opportunity to film an eruption in a way that few have ever dared.

Helms used his brand new DJI FPV drone to get up-close-and-personal with the erupting volcano, flying the $1,300 aircraft dangerously close to the flying lava. In fact, he got a little bit too close, and when a burst of red-hot liquid rock came flying at the drone it lost connection and crashed into the fiery pit. It was the drone’s final flight, but the footage Helms was able to save from the journey was probably worth the price.

The video is roughly two minutes long, and it shows the long approach to the volcano and ends with the death of the drone. Check it out:

You can’t deny that it’s an incredible view of one of nature’s most intense spectacles. Flying directly over a stream of fast-moving lava and into the pit where it is being pushed up from deep below the surface is something that just wasn’t possible before the rapid advancement of drone technology. Now that we have them, hobbyists have found many ways to capture interesting sights in new ways, but they’ve also discovered how easily they can be completely destroyed.

Nobody expected DJI’s FPV drone to be volcano-proof, so you can’t fault the drone for not surviving the trip. Based on his description of the event on YouTube, Helms seems totally at peace with the decision to fly the drone super close to the eruption:

This unique HD footage provides a rare view right into the volcano’s caldera and lava fountain during one of its geysir-like eruptions. FPV drones are notorious for crashing, it is part of the hobby. So in an effort to get a unique vantage point and perspective into the crater we flew this remarkably capable drone as close to the lava river and caldera as possible. One of it turned out to be it’s very last flight. At least the goggles record a great 1080p image allowing us to actually capture the last seconds the drone saw.

I wouldn’t necessarily recommend trying anything like this, or even getting close to a volcano with a drone that you want to continue using in the future. Even if the tiny aircraft had been a bit higher, it’s likely that the intense heat of the active eruption would have caused some damage or perhaps even a crash.